Since Israeli snipers brutally killed renowned Palestinian journalist Shireen Abu Akleh in Jenin yesterday, I—and many other Palestinian people around the world—cannot stop thinking of her.

Shireen is a legendary voice exposing Israeli war crimes against her people, and the Israeli state murdered her for it. Multiple eyewitness journalists report that Israeli snipers targeted Shireen in her press vest and shot her in the head, near the ear where her helmet didn’t protect her. This is not an accident. It is a targeted assassination by the same Israeli regime that our tax dollars fund by the billions.

Yet the media headlines covering Shireen’s killing have been shamefully inaccurate.

“Shireen Abu Akleh, Trailblazing Palestinian Journalist, Dies at 51,” reads the original headline in the New York Times, as if she had died a peaceful death. Such passive headlines completely fail to name the Israeli regime as the actor responsible for killing Shireen, whitewashing state violence. The NYT article quoted Israeli spokespeople’s lies early on without question, while burying statements from eyewitnesses and human rights group B’Tselem.

The result of this harmful reporting is devastating, because it gives the Israeli regime a free pass to continue murdering journalists and the Palestinian people with impunity.

This weekend, you can join protesters around the world taking to the streets. Find actions here, and carry these posters honoring Shireen and demanding justice for Palestine, from Jenin to Gaza to Masafer Yatta. 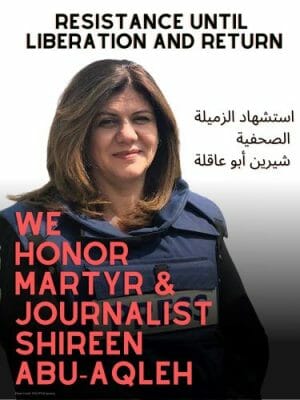 We resist until liberation and return. Thank you for taking action in the streets and by holding media outlets accountable.

Looking for more ways to take action? Read and share the new 2022 “How to Rise Up With Palestine” graphics.

Cat Knarr is the Communications Director at the US Campaign for Palestinian Rights.