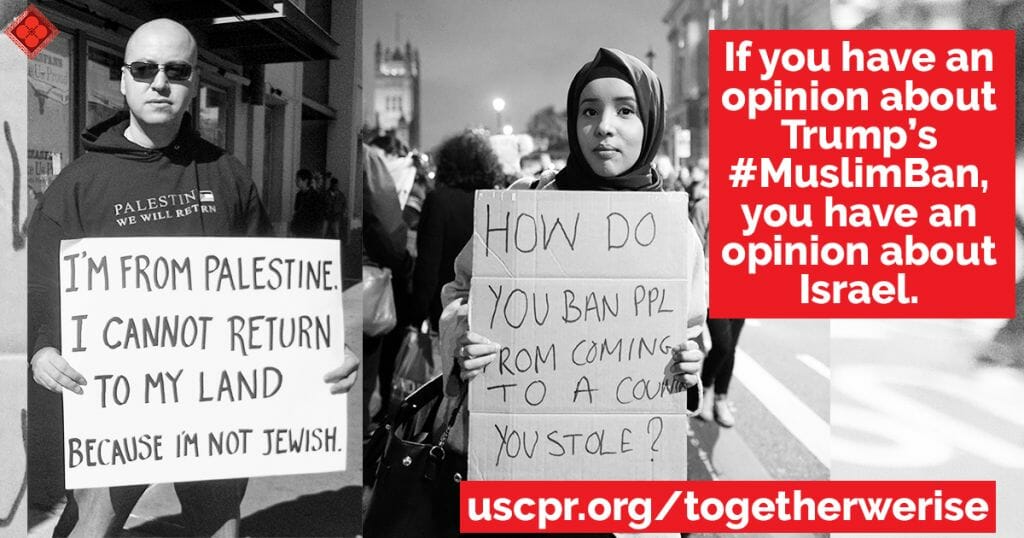 In January, outraged liberals and progressives nationwide took to the streets and airports to protest Donald Trump’s #MuslimBan targeting refugees, immigrants, Arabs, Iranians, Africans, and others based on their religion and national origin.

The ban has torn families apart, put asylum seekers at risk, and further endangered countless refugees fleeing wars and famine. As Trump continues to expand the War on Terror in places like Yemen, Syria, Iraq, and Afghanistan, there will only be more civilians killed and forced to leave their homes.

USCPR and member groups joined the chorus calling out the racism, xenophobia, and anti-Muslim bigotry behind this proposed ban, which is all the more grotesque considering the role of U.S. interventions and militarism in creating the conditions from which people are being forced to flee. We knew this: 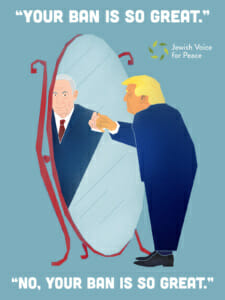 Join us for a ground-breaking webinar on World Refugee Day:

No Bans on Stolen Lands: Refugee Resistance from the U.S. to Palestine

Next Tuesday, June 20th at 9am Pacific / 12pm Eastern, connecting and lifting up 70 years of Palestinian resistance to Israel’s refugee ban and those impacted by and fighting Trump’s ban, the webinar will feature:

We cannot exceptionalize Israel’s actions that are mirrored by our own government. Likewise, we must also say clearly:

We can and must bring in those aghast by Trump’s ban to see the connections with Israel’s own U.S.-supported 70-year ban on Palestinian refugees. Israel was created and is maintained through the ethnic cleansing and ongoing exile of more than 7 million Palestinian refugees who are denied the right to return to their homes and lands — an inalienable right inscribed in international law — simply because of their religion and national origin.

Join this powerful webinar and others in our 2017 Political Education Campaign, Together We Rise: Palestine As a Model of Resistance.