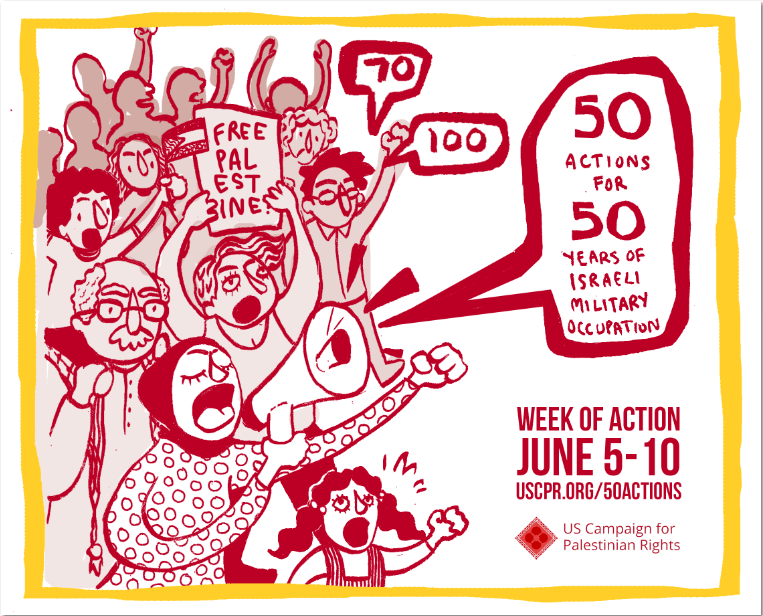 09 MayWe must mark this moment.

One month from now — June 5-10 — marks the 50-year anniversary of Israel’s brutal military occupation of the Gaza Strip and West Bank, including East Jerusalem. Groups worldwide are planning actions to demand an end to Israel’s apartheid regime and ongoing ethnic cleansing of the Palestinian people.

How will you mark half a century of occupation?

Sign up today to join the Week of Action June 5-10!

Choose any action during that week that furthers the work you are already doing in your community. Here are some possibilities:

Learn more about all these ideas and sign up today! The US Campaign is offering resources, promotion, and support for actions and events, so let us know what you’re planning!

Israel’s 1967 occupation is  the latest iteration of Israel’s settler colonial project. 2017 also marks 100 years since the Balfour Declaration, which set the stage for the Zionist movement to colonize Palestine to establish a Jewish state; 70 years since Zionist militias (and later the Israeli army) began  ethnic cleansing of indigenous Palestinians (the Nakba  — or “catastrophe”) following the UN recommendation to partition Palestine; and 10 years of Israel’s suffocating blockade of Gaza. These anniversaries — 100 – 70 – 50 – 10 — provide the historical context to understand the significance of 50 years of occupation and why we must fight against Israel’s ongoing Nakba in all its forms.

Spread the word far and wide. Enough is enough. Sign up to mark the historic week of June 5-10 with an action or event.