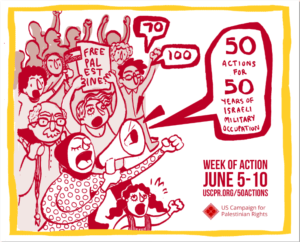 During the June 5-10 week of action, from coast to coast, in the midwest, and in the south, groups were #Marking50, calling for an end to Israel’s occupation and all forms of its ongoing ethnic cleansing of Palestine as part of a commitment to justice for all Palestinians, whether in historic Palestine or in exile.

Read our report on the week here.

Israel’s actions since 1967 make clear that the occupation was never meant to be temporary. It is not an aberration. It is the latest extension of Israel’s ethnic cleansing and subjugation of Palestinians, which continues to this day.

The week of action was a response to a call from Palestinians to send a clear message: Enough is enough and Israel must end all its oppression of Palestinians for freedom, justice, and equality to prevail.

Check the map for events that happened!

Some actions to consider: 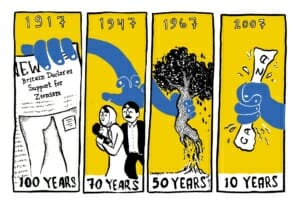 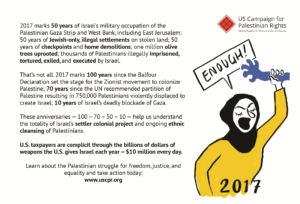 Get Connected! Use the form below to register your action. We’ll be in touch with resources you can use! We’ll make sure your action is on the map and to connect groups organizing actions. The earlier you can share information, the more time we will have to support and promote it.