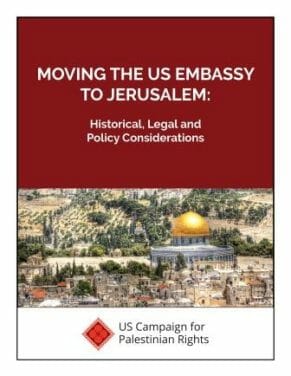 Read our policy paper, Moving the US Embassy to Jerusalem: Historical, Legal and Policy Considerations, to learn more about the implications of the Trump administration’s declaration of recognition of  Jerusalem as Israel’s capital.

#BREAKING: Donald Trump signs a waiver to the Jerusalem Embassy Act to keep the US Embassy in Tel Aviv, but the Senate...

Posted by US Campaign for Palestinian Rights on Thursday, June 1, 2017

#BREAKING: #Trump signs waiver keeping US embassy in Tel Aviv, but Senate will vote on Mon. to move it to Jerusalem. https://t.co/JC8tQ0DBpu pic.twitter.com/WootfalbrP