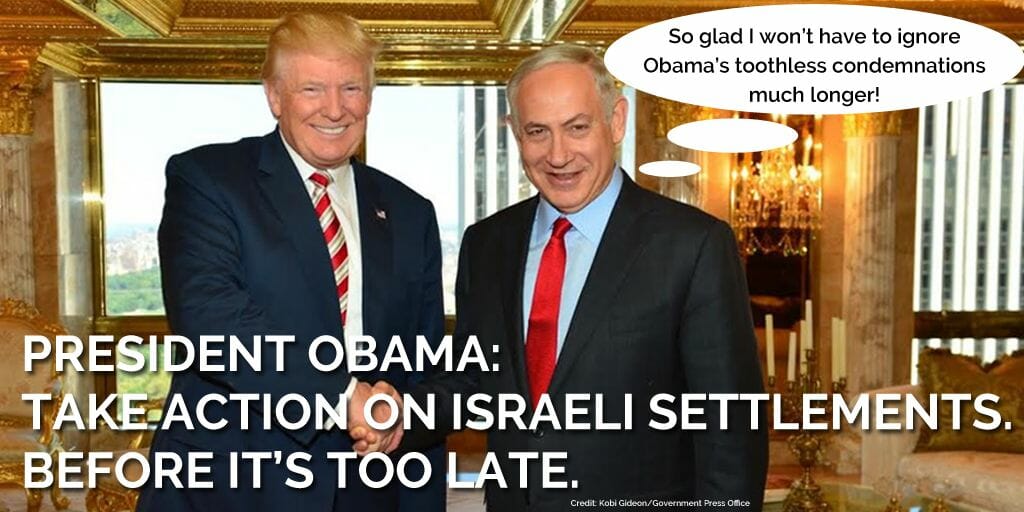 “It is certainly not Mr. Trump’s view that [Israeli] settlement activities should be condemned and that it is an obstacle for peace, because it is not an obstacle for peace.” That’s what the co-chair of the president-elect’s Israel Advisory Committee told Israeli Army Radio last week.

And whoosh, just like that, half a century of bipartisan US policy—not only deeming Israel’s colonization of Palestinian land an obstacle to peace, but illegal as well—could fly out the window when Donald Trump becomes president in January.

For eight years, the Obama administration has staunchly criticized the expansion of Israeli settlements, but hasn’t done anything to stop it, as the population of Israel’s illegal settlements increased by more than 100,000 people since 2008.

Before it’s too late, we need President Obama to finally take action to stop Israel’s illegal colonization of Palestinian land.

More than 8,000 people have already signed our petition. Help us double that number today so that when we present Obama administration officials with our ideas in the near future, they’ll see they have grassroots support behind them to finally take action!

And after you’ve acted, be sure to join our Thunderclap to amplify our message on social media. We’re already set to reach more than 400,000 people. Can you help get us to 1 million?

As President Obama’s term draws to a close, many analysts are wondering if he’ll do something dramatic to alter his legacy on the Israeli-Palestinian issue.

The most meaningful way for President Obama to leave behind a positive legacy would be to take action on Israeli settlements. There are a lot of options at his disposal, including:

• Adding to terrorism lists and freezing the assets of Israeli individuals and organizations involved in settler violence against Palestinians, acts which the State Department already includes in its annual report on terrorism

Wouldn’t it be great if any or all of these ideas turned out to be President Obama’s last action on this issue? Please help us generate the political support we need to get the president to finally take action.

#Trump doesn't think Israeli settlements are obstacles to peace. Tell #Obama to finally act, before it's too late. https://t.co/EhKY61Ej1l pic.twitter.com/jYK0O7To7V