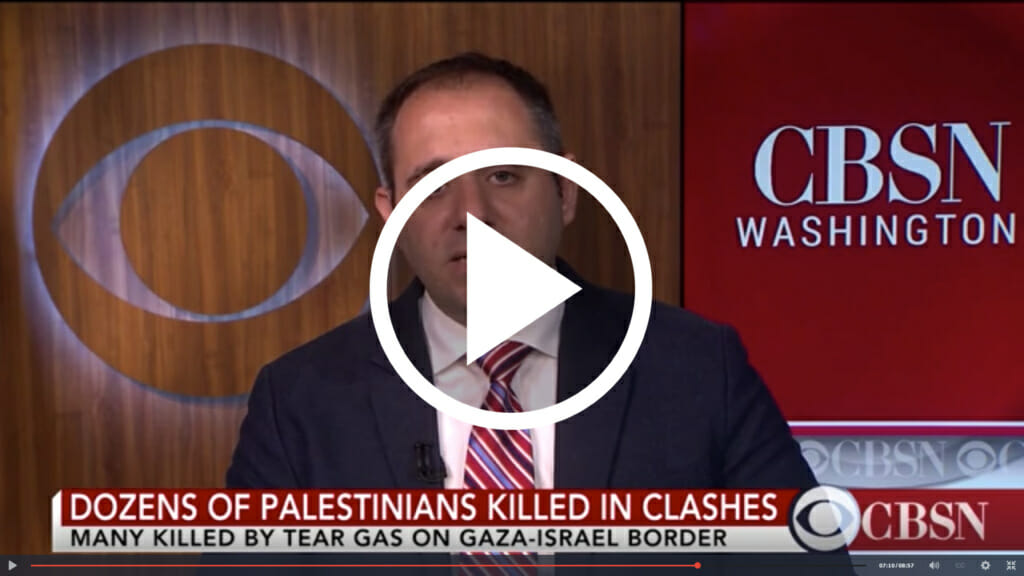 ANNE-MARIE GREEN, CBS NEWS: We’re continuing to follow the escalating violence in Gaza. At least 60 Palestinians have now been killed in violent protests in the region.

VLADIMIR DUTHIERS, CBS NEWS: Today marks the 70th anniversary of the founding of the state of Israel, what Palestinians refer to as their “day of catastrophe.” This all comes just the day after the United States opened its new embassy in Jerusalem, fulfilling one of President Trump’s biggest campaign promises. With us to talk about these protests is the Executive Director of the US Campaign for Palestinian Rights, Yousef Munayyer. Good to see you Yousef.

YOUSEF MUNAYYER: Thanks for having me.

VD: So what we’ve seen in the protests today, and over the last couple of weeks, is essentially a reaction to the 70th anniversary of the founding of the State of Israel, and has not as much to do about the US Embassy being moved to Jerusalem. Or is it a combination of the two?

YM: Well no, it’s not really about the moving of the US Embassy to Jerusalem, even though that is a very important decision that is something that Palestinians and people really around the world object to, for other reasons. And these protests are not about the creation of the State of Israel either. These protests are about Palestinians demanding their basic rights. Today on May 15th, Palestinians mark what is known as the Nakba. The Nakba refers to the period from 1947 to 1949 when the vast majority of the native inhabitants of Palestine were expelled from their homes or fled during hostilities, and were then subsequently denied the right to return to their homes by Israeli forces and the newfounded Israeli state. So what Palestinians are marking today and in these protests that have led up to this day is their depopulation, their ethnic cleansing essentially, and the fact that they have been denied a right to go back to the towns and the villages where they are from, and they are challenging that. They are challenging those policies of denial with these protests, and as we have seen the Israeli state – as it has been willing to do historically going back to 1948 – has used brutal, lethal force to prevent that from happening, to prevent Palestinians from going back to their homes, to prevent them from leaving what is essentially now an open-air prison in the Gaza Strip.

AG: You talk about a sort of brutal, lethal force. The past couple of days have been amongst the deadliest in the several weeks of protesting, we’ve seen children being killed. I think Vlad and I, well I don’t want to speak for you Vlad, but certainly yesterday I was struck by the different images of the protests along the Gaza Strip, and this ceremony in Jerusalem where there was elation and celebration. And I thought to myself, to what end, what – these protests, what is the short-term goal, and what will bring them to an end?

YM: Well I think you’re right to point out the very stark juxtaposition of imagery that we saw yesterday, and this was really something that was easy to anticipate given the decision that was made here in Washington to not only move this embassy to Jerusalem, but also to do so on this date, which is essentially adding insult to Palestinian injury, and siding with an Israeli historical narrative, and essentially dancing on the graves of Palestinians past and present. And so this was a very, very incendiary move and decision, and I think the images that we saw today of officials from the American government clapping and singing and cheering along with members of the Israeli government, as Israeli soldiers were carrying out the orders of that government gunning down scores of Palestinian protesters and injuring hundreds more, really speak volumes about the problem that we have here in terms of the United States’ handling of this issue – one that obviously predates the Trump administration, but has culminated in the perverse reality that we saw yesterday.

VD: Yousef, having covered the region, I just wonder – and Anne-Marie have been talking about this as we’ve been watching the carnage unfold – there are certainly organizations like yours in the United States and abroad that are helping Palestinians fight for their rights. But it does seem to a lot of people that the leaders in the West Bank, the leaders in the Gaza Strip – we’re talking about Hamas and the Palestinian Authority – seem at this point to have failed the people in getting them to some kind of viable – being able to provide a life for them, their children and future generations. Is it, at this point in time, time for the Palestinian people to say “we’re rejecting the leadership of these individuals that have led us down this path, and the years of bloodshed, we need to find new leaders to perhaps forge a new path with the State of Israel and come up with a solution.”

YM: Well I think if you look at poll numbers among Palestinians, what you see is an overwhelming rejection of the very parties that you mention, and this is not new. The key reason why they reject these leaders – and I’ll just cite some of the poll numbers for you: the Palestinian President Mahmoud Abbas, 70% of the population want him to resign, and Hamas really only has the support of a very small minority of Palestinians in the West Bank and the Gaza Strip. But the reason that Palestinians are disillusioned by these leaders is because they have failed to advance the national objectives which they still hold very, very dear, and these are the rights to live freely in your own land, to live in the homes and villages where you’re from, without discrimination, without military occupation, and to be treated as equals before the law. Unfortunately leaders of all of these parties have failed to advance that. That being said, that doesn’t mean that there’s nothing that can be done, and we have to remember that these are people living under military occupation. We have a role to play here in the United States and elsewhere in demanding that our own governments address this issue in a more serious way, demand accountability and demand the end of the denial of Palestinian rights. This massacre that took place yesterday was fully funded by American taxpayers like you and me. We paid for the guns and the bullets that killed those people in the Gaza Strip. We don’t have to do that any more, we can make the choice to stop that, and that would send a very strong and important message to the Israelis that those kinds of actions are intolerable and unacceptable.

VD: What do you say when you – as you probably just heard, Ambassador Nikki Haley at the United Nations saying “no country in this chamber would act with more restraint than Israel has,” what’s your response to that?

YM: It’s sickening. We saw what took place yesterday, we saw what took place over the last several weeks. You have overwhelmingly unarmed people coming to protest inside what is essentially a very large prison, that have been collectively punished for over a decade now by policies of enstranglement and siege, debilitating their economy; their fishermen and farmers have been shot at – and here they come to protest for their rights, and the Israeli military sends their snipers to sit atop the dunes from a distance and pick these people off, again with the rifles that we Americans have paid for, and this individual that represents the United States in front of the international community wants to applaud them for restraint? I think that’s something that should embarrass all Americans.