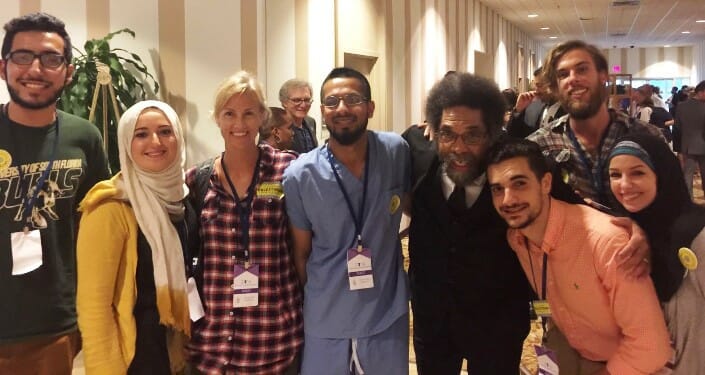 Our supporters blanketed the Democratic National Convention (DNC) platform committee meeting, distributing our “Progressive for Palestine” and “I Support Palestinian Human Rights” buttons to delegates, many of whom were eager to show their support on national TV.[1]

Even though the committee, by a narrow margin, outrageously voted down amendments calling for an end to Israeli occupation and illegal settlements, and for rebuilding Gaza, you’ve got to check out this inspiring three-minute video of Maya Berry, from the Arab American Institute, and Dr. Cornel West, who got a standing ovation from delegates and the public for declaring “Palestinians ought to be free!”

And CNN acknowledged that the failure of these pro-Palestine amendments to pass “led to the loudest boos of the day.” [2]
The message was clear: publicly declaring support for Palestinian human rights is no longer taboo at even the highest levels of political discourse.

That’s why we’re excited to head to Cleveland today for the Republican National Convention (RNC) and to Philadelphia next week for the DNC, where we’ll be creating an even larger, more visible presence for Palestinian rights with member groups American Friends Service Committee (AFSC), American Muslims for Palestine, Code Pink, Jewish Voice for Peace, and our friends at the Arab American Institute.

Check out all of the many Palestine-related events and protests at the RNC and DNC that we’re organizing and supporting.

We’re especially excited to let you know about a path-breaking round table we’re hosting in Philadelphia with AFSC on Monday, July 25, featuring Rep. Keith Ellison, Linda Sarsour, and Dr. Jim Zogby, entitled “Progressive for Palestine: Is the US Ready to Rethink Policy on Israel?”

RSVP to attend the event in person, or watch live-stream anywhere.

We’re still recruiting volunteers to help us organize at the DNC in Philadelphia. Want to help? Pleasefill out this form and we’ll be in touch.

We’ve printed thousands of these signs, buttons, stickers, and t-shirts (shown below) to create a large and visible presence for Palestinian rights at the RNC and DNC.

Thank you for your support and for helping us to send a loud and clear message at the RNC and DNC: Palestinian rights can no longer be ignored.