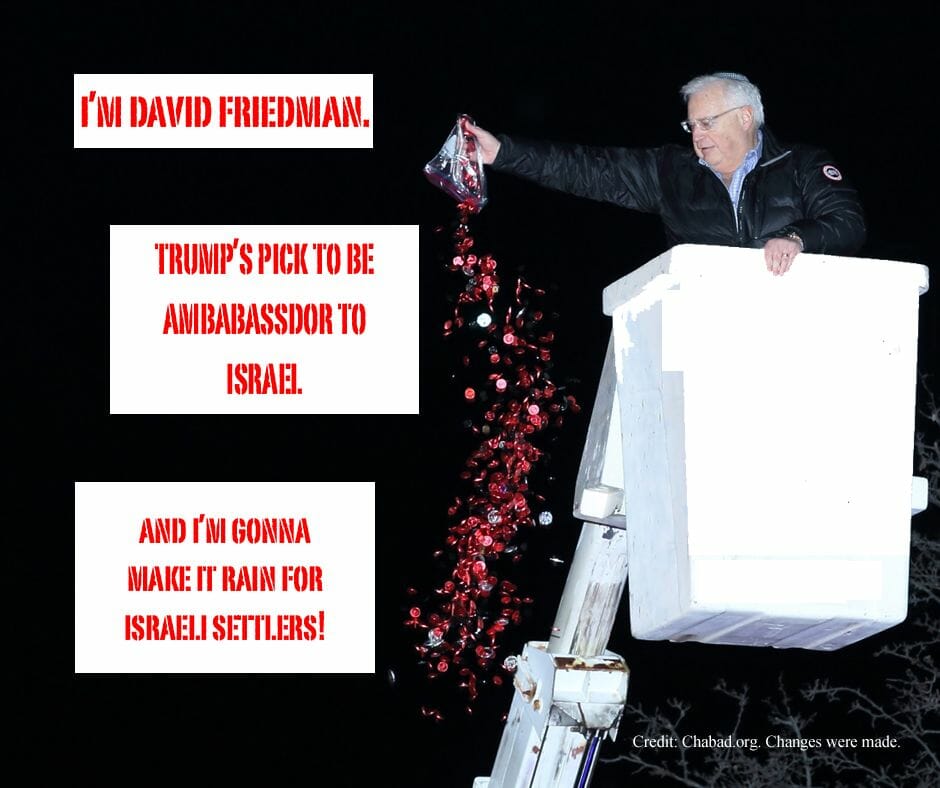 23 MarURGENT: Senate Voting on Extremist to Be Ambassador to Israel NOW!

For the past several months, thousands of you have contacted your Senators to oppose Trump’s nomination of David Friedman to be Ambassador to Israel.

Your advocacy is working! Earlier this month, Friedman barely squeaked by the Senate Foreign Relations Committee, which voted 12-9, largely along party lines, to recommend his nomination to the Senate. Sen. Bob Menendez (D-NJ) was the only Democrat to break party ranks and vote with Republicans for Friedman. This was the first time ever that an ambassadorial nomination to Israel was so closely contested.

And for good reason. Friedman is an extremist who personally identifies with and finances Israel’s settler movement. He opposes Palestinian rights. And he demonizes anyone who disagrees with his fundamentalist views.

It’s no wonder then that Senate Majority Leader Mitch McConnell (R-KY) filed a motion yesterday to try to avoid a full Senate debate on Friedman and confirm him without a recorded vote.

The Republican leadership is trying to ram through Friedman’s confirmation because of the growing opposition to his nomination. According to our “whip list” count, at least 15 Senators are on record as being critical of Friedman and many have pledged to vote no.

[[First_Name]], this is urgent. We just found out that the Senate is voting today at 12:25 Eastern on whether to skip the debate on Friedman’s nomination and proceed directly to a vote.

Click here and please call your Senators right now! Urge them to vote NO on the “cloture motion” on David Friedman’s nomination and ask your Senators to demand a debate and recorded vote.

Sorry for the last-minute nature of this alert but this news just broke a few minutes ago.

Thanks for taking action!