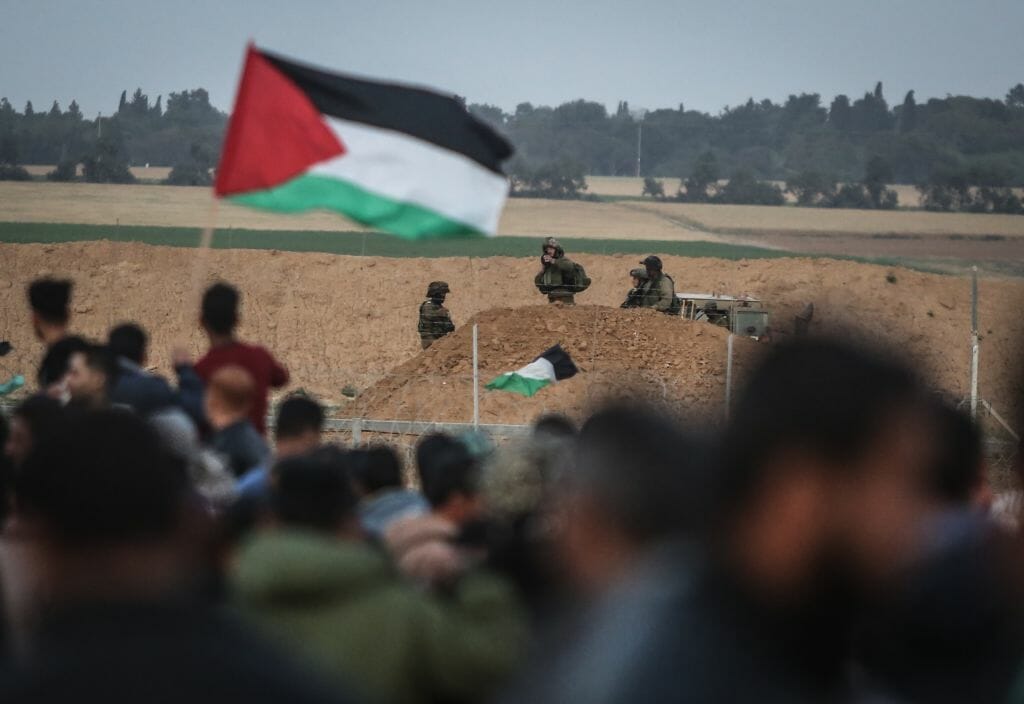 A week ago today, 30,000 Palestinians in the Gaza Strip began six weeks of sit-ins and demonstrations to demand their internationally recognized right of return to the villages they were displaced from in 1948, which lie just a few miles away, totally inaccessible to the residents of the besieged coastal enclave.

As they exercised their right to protest, Israel met them with brutal force and 100 snipers, killing 18 Palestinians and injuring more than 1,400. The Israeli military used drones to drop tear gas over the encampments of the demonstrators, where entire families were gathered, and prevented medics from evacuating the injured. And then they bragged about it, tweeting that they knew where every bullet landed.

Palestinians are being killed for having the audacity to assert their right to freedom, justice, equality, and life. Email your Members of Congress today to tell them that Palestinians have the right to protest without paying for it with their lives.

Human Rights Watch blasted the Israeli military’s actions, calling them unlawful and saying, “Israeli soldiers were not merely using excessive force, but were apparently acting on orders that all but ensured a bloody military response to the Palestinian demonstrations.” Israel’s devaluing of Palestinian lives and regular use of excessive force are not new, but central features of its illegal military occupation and apartheid regime.

Today, the Palestinians participating in the Great Return March are marching again. They are being met with tear gas and live fire from Israeli snipers, again. One Palestinian, 39-year-old Usama Khamis Qudeih, has already been killed and more than 40 others injured with live ammunition.

Israel is expecting to act with impunity, as it has so many times in the past. It is past time for us to demand accountability.

EMAIL YOUR MEMBERS OF CONGRESS NOW TO DEMAND THE US OPEN AN INVESTIGATION INTO ISRAEL’S UNLAWFUL KILLINGS OF 18 PALESTINIAN DEMONSTRATORS IN GAZA.

Congress will not act until they hear from YOU. When they hear your voices, your Members of Congress may call for an investigation into the murders of the 18 who lost their lives last week. Israel’s impunity must come to an end. After you take action, forward this email to three friends to encourage them to stand up for Palestinian rights.

As Palestinian analyst Diana Buttu wrote in the Washington Post,

“An independent investigation would highlight that Gaza remains under Israel’s 50-year-old military rule and decade-old naval blockade, cut off from the world. It would undoubtedly highlight that, in addition to the electrified fence on Gaza’s eastern and northern sides, Gaza is blocked in with a concrete wall to the south and by the naval blockade to the west. It would highlight that all of the Palestinians killed were killed inside Gaza, and within the undefined Israeli-imposed ‘buffer zone’ that further cuts into Gaza’s territory, in many places by as much as 1,000 feet. In the words of one protester friend shot on Friday, ‘We did not go to the buffer zone; the buffer zone came to us.’ An independent investigation would undoubtedly highlight that live fire may only be used against combatants participating in military action. Killing people is neither a video game nor a sport. In sum, an investigation would reveal that for Israel, it does not matter that Palestinians protest; our lives are considered expendable.”

I can’t say it enough times. Your voice matters, now more than ever. Tell your representatives that you will not stand for the continued impunity of Israel as it steals and suffocates Palestinian lives. Demand an investigation today.