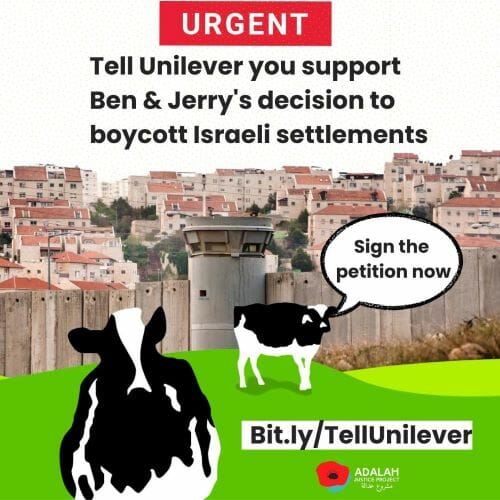 07 SepSupport Ben & Jerry’s as They Hold Firm for Palestine

As we witness Israel’s colonial violence against the Palestinian people, from Jenin to Masafer Yatta to Gaza, it’s vitally important that we hold international actors accountable for their complicity—including corporations that profit from Israel’s violent apartheid system.

Together, we must show Unilever that the Ben & Jerry’s board has MASSIVE grassroots support. People who care about social justice around the world also care about Palestinian rights, dignity, and freedom.

If the Israeli government can force Unilever to betray Ben & Jerry’s social justice principles, it will be that much harder for us to push the next company to do the right thing for justice and human rights.

Right now, we have a small window to impact the outcome of this case. We need your urgent help.

Email Unilever now, and tell them you support Ben & Jerry’s decision not to profit from illegal Israeli settlements on stolen Palestinian land. Thank you for taking action.