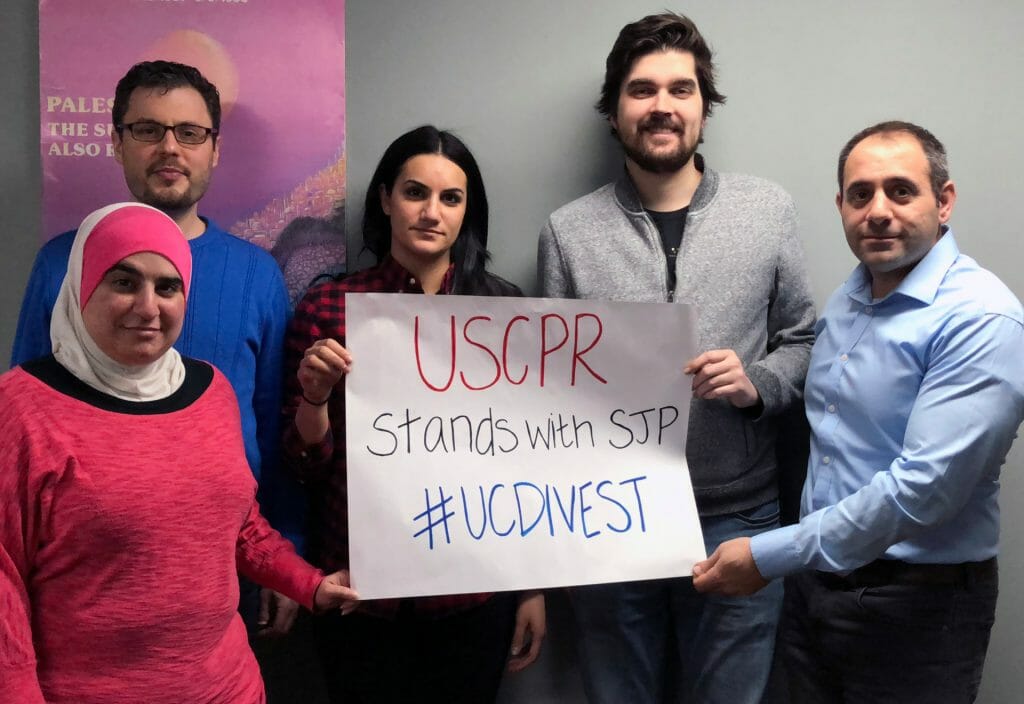 14 MarStudents for Justice in Palestine call for Univ. of California to divest!

Students for Justice in Palestine (SJP) just launched a groundbreaking campaign, calling for the entire University of California (UC) system to divest from Israeli apartheid! Today, SJP students are showing up, uninvited, to the UC Regents Board meeting in Los Angeles to announce the new statewide #UCDivest campaign.

The students are taking this step because, despite student bodies passing resolutions at nearly every school across the UC system calling for the withdrawal of university investments from corporations profiting from Israeli apartheid, administrators have refused to act. The UC Student-Workers Union UAW Local 2865, representing 17,000 teaching assistants, readers, research assistants, and tutors, also voted to support divestment. This campaign pushes UC administrators to implement the principled change that students and workers are standing behind.

Student campaigns like #UCDivest have resulted in more than 35 campuses across the USpassing student council divestment resolutions. These divestment campaigns are an effort to heed the Palestinian call for institutions around the world to stop profiting from the abuses of Palestinian rights, and the resolutions passed call for universities to withdraw investments from corporations complicit in Israel’s occupation and apartheid regime.

The SJP students have justice on their side, but they are up against entrenched institutions and big money. They need you, and allies everywhere, to show support for #UCDivest:

2. Show UC SJPs that you stand with them! Share a photo and message of solidarity using #UCDivest.

Click to tweet: Universities shouldn’t invest in corporations complicit in Israeli occupation and apartheid. UC Regents, do the right thing and divest! #UCDivest

Click to tweet: Why is the University of California school system profiting from abuses of Palestinian rights? UC Regents, now is the time to divest! #UCDivest

Click to tweet: Using tax and tuition dollars to profit off the oppression of Palestinians is NOT OK. UC Regents, stand on the side of justice and divest from corporations complicit in Israel’s human rights abuses! #UCDivest

Click to tweet: Students across the University of California system have spoken. It’s time for UC to stand on the right side of history and divest from Israeli occupation and apartheid. #UCDivest

SJPs’ divestment campaigns across the country are reminiscent of the student movement to divest from Apartheid South Africa, and have educated a generation of college students about Israel’s occupation and apartheid. As student campus activism on Palestine faces increasing repression, your visible support is especially important. Thank you for standing with SJP and #UCDivest!