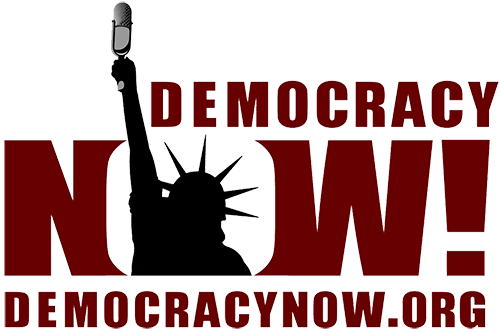 Palestinians gathered at the Israeli-Gaza border for a third Friday in a row as part of the ongoing “Great March of Return” protests. Paramedics say at least 30 Palestinians were injured by Israeli soldiers during Friday’s protest. Israeli soldiers have killed at least 34 Palestinians since the wave of protests against Israel’s occupation began on March 30. We get response from Ramah Kudaimi, director of grassroots organizing at US Campaign for Palestinian Rights. She is also a member of the Syrian Solidarity Collective and on the National Committee of the War Resisters League. She calls for the U.S. to end its military support for Israel, and argues that Palestinian rights cannot be separated from U.S. actions in the region.

RAMAH KUDAIMI: Yeah, it’s been inspiring seeing Palestinians, you know, take up their right of return. You know, we’re going to be marking 70 years of ongoing Nakba, the forced expulsion of Palestinians to create the state of Israel back in 1948, expulsions that have continued in the past 70 years as Israel pushes more Palestinians off their lands and grabs more of their—and grabs their land to embolden its power over the Palestinian people. And unfortunately, obviously, it should not be shocking that Israel would respond in a violent way, because Israel’s violence—very presence on Palestinian land is violence.

And I think that we should note—you know, obviously, be inspired by the bravery of Palestinians and be prepared to push the United States to end its military support of Israel, the billions of dollars that we send in military aid to Israel every single year, that allows Israel, emboldens Israel, to do what it does, and the protection to Israel, and also should be noting, in terms of if we want true freedom and liberation of Palestine, there needs to be freedom and liberation in the region, as well. We cannot separate Palestine from the greater issues in the region, whether it’s Syria, whether it’s Yemen or Egypt or Libya. These are regions that have been attacked and bombed by various forces.

And the impact of Israel’s Zionist policies against the Palestinians goes beyond just Palestinians, obviously impacts mostly Palestinians first and foremost, but, for example, in Syria, the Golan Heights is still occupied by Israel. Israel has claimed, you know, again and again, that—the Syrian regime claims that it is at the forefront of resisting Israel. But, in fact, that border, their border with—you know, the, quote-unquote, “border” with Israel has been the quietest borders for decades. Syrians were making fun of the regime when the revolution first started in Syria in Daraa in 2011, and he sent his tanks there to shut down, you know, just children writing regime—you know, “We want freedom” slogans on walls of their schools. And the regime sent tanks and tortured these children and, you know, wanted to really put down the uprising from the start. People made fun of the regime, telling him, “Umm, the Golan Height is that way. Why are you telling—why are you sending your military here? Go, you know, liberate our land, that you claim to be.” So I think we need to really talk—as we see and are inspired by the Palestinian people, we should be inspired by all the people in the region who have rose up, and really look at these struggles as very interlinked.

AMY GOODMAN: Ramah Kudaimi, I want to thank you for being with us.