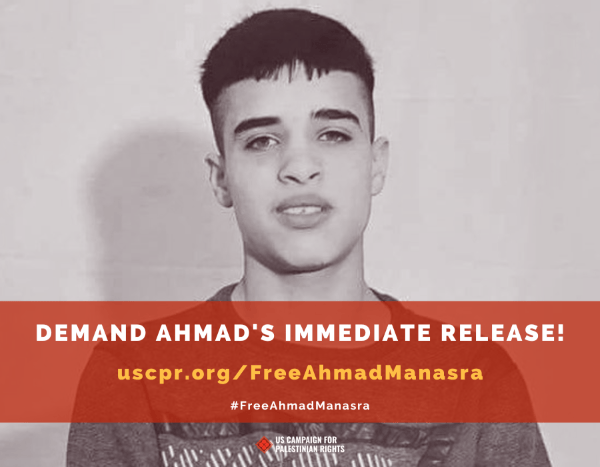 Maysoon and Salah have been waiting seven years for their son Ahmad Manasra to be freed from Israeli prison, after Israeli authorities brutally arrested him when he was only 13.

“He is living under a situation of ongoing torture,” Ahmad’s mother Maysoon said on a public call with the Palestine-Global Mental Health Network. “He needs to leave today as soon as possible. He is dying in front of my own eyes—what are they waiting for?”

For the past seven months, Israel has held Ahmad Manasra in solitary confinement—when the UN states that more than 15 days is torture. Every time his parents see him his health is worse. As Israel continues to torture him, Ahmad cuts his wrists and fears he will die in prison. “I am begging for you to do whatever you can to free him,” Maysoon said.

We must answer her call now! Tweet your reps and tell them to demand Ahmad’s immediate release from Israeli prison.

Over the past seven years, Ahmad has been subjected to the Israeli military and prisons’ brutal violence over and over with severe consequences on his physical and mental health. No person should have to endure this traumatic abuse, but the Israeli regime regularly detains children and tortures prisoners with impunity.

Ahmad Manasra should be home safe with his family who loves him dearly. Speak up for his freedom now!

Together, our voices can raise the level of international awareness for Ahmad’s freedom and pressure Israel to release him at last. Thank you for taking action.

Done, or not on social media? You can also email your members of Congress to #FreeAhmadManasra.