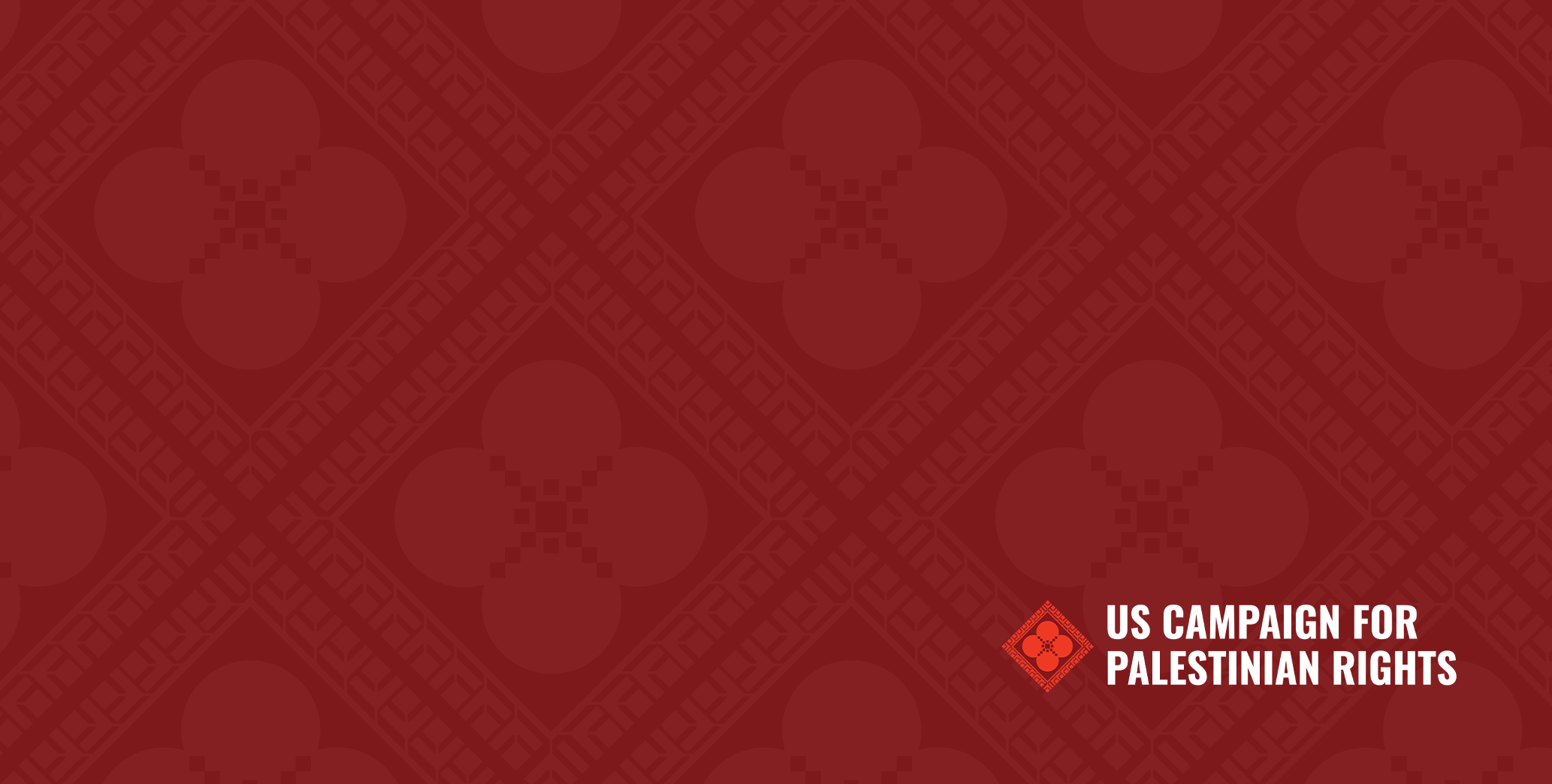 WASHINGTON, DC, August 2, 2016 – On July 17, 2016, a group of young American delegates traveled to Israel-Palestine in order to observe the conditions under which Palestinians live, and to gain a better understanding of the situation on the ground. Upon their arrival, a US Campaign staffer and four other members of the group — all carrying US passports — were interrogated by Israeli border police about their backgrounds and political involvement.

One of the delegates, Bina Ahmad, a New York City public defender and former vice president of the National Lawyers Guild, was denied entry to the country and given no reason why, then transferred to a filthy cell without knowing how long she would be held. Some of the female detainees were asked irrelevant and intrusive questions about their personal relationships, and were held for as long as 18 hours. All five of the delegates endured similarly degrading and terrifying ordeals, and were put on flights back to the US. Some received travel bans that bar them from entering Israel or the occupied Palestinian territories for the next 10 years.

Calls to the US Consulate’s Citizen Services resulted in no assistance for the delegates. Some officials made comments indicating they had no power over the treatment of US citizens held at the airport despite visa agreements between Israel and the United States.

It is an outrage that Israel habitually mistreats US citizens and refuses to adhere to these visa agreements. There is a well-documented pattern of Israel denying entry to US citizens attempting to visit Israel or the occupied West Bank, East Jerusalem and Gaza. In June of 2014, congressional staffers heard briefings on the Hill regarding the matter.

During this particular delegation, four of the five delegates who were questioned, held, and denied entry were people of color and Muslim, and the fifth had a long beard. Israel has ethnically and religiously profiled visitors so often that the State Department’s travel advisory for Israel reads: “Some US citizens of Arab or Muslim heritage not on the Palestinian Population Registry or otherwise prohibited from entering Israel have experienced significant difficulties and unequal and hostile treatment at Israel’s borders and checkpoints.”

At a press briefing in March of 2014, State Department spokesperson Jen Psaki stated that “the Department of Homeland Security and State remain concerned with the unequal treatment that Palestinian Americans and other American of Middle Eastern origin experience at Israel’s border and checkpoints, and reciprocity is the base basic condition of the Visa Waiver.” In August of 2015, State Department spokesperson John Kirby added that “the US Government remains concerned at the unequal treatment that Palestinian-Americans and other Arab-Americans receive at Israel’s borders.”

Quotes from the delegates about their individual experiences are found below. To interview one of the delegates, please contact Ramah Kudaimi at (703) 312-6360 or membership@endtheoccupation.org.

Quotes from the delegates:

“After repeatedly asking why I was being yelled at, handcuffed, and threatened with force, I was never given any explanation for the treatment I received. In fact, I was told that they did not owe me an explanation, and that any rights I had as a US citizen were invalid under Israeli law. The only thing made clear during the 18 hour ordeal was that their dehumanization of me was based on a ‘hunch’ rooted in nothing more than my name and ethnic background.”
– A 26-year-old American of South Asian descent, who asked not to be named

“It was apparent from the moment I landed that Israel abuses Muslims. Israeli security forces aggressively interrogated me numerous times over many hours, inappropriately demanding access to my private email accounts and demanding that I give them names of Palestinian activists. I refused. When I told them I wanted to visit Masjid Al-Aqsa and the Dome of the Rock, a UNESCO World Heritage Site, they mocked me and insulted my faith before strip-searching me and shoving me into a cold detention prison. The degrading treatment that I experienced as a U.S. Muslim pales in comparison to the daily humiliations suffered by Palestinians. Israel controls the movement of Palestinians, including Palestinian-Americans, into and out of Israel-Palestine. This system of control at the borders is discriminatory and unjust, and another manifestation of Israel’s apartheid policies. That the U.S. continues to support these policies is shameful.”
– Muhammed Malik, former Executive Director of Council on American-Islamic Relations (South Florida), and co-founder of Muslims for Ferguson

“At some point the woman interrogating me called me a terrorist in the main waiting area at the bridge where there were plenty of people around, accusing me of coming to do bombings and threatening to tell the US government this. All of this was based only on me being visibly Muslim. The US government is an active partner in Israel’s war crimes against Palestinians, providing billions in military aid every year. Our experience traveling to witness the reality of life for Palestinians is proof once again that both countries are plagued with institutionalized racism, Islamophobia, and militarism.”
– Ramah Kudaim, Director of Grassroots Organizing, US Campaign for Palestinian Rights

“As a human rights attorney in the US, I am outraged by this level of blatant discrimination. Working on human rights and criminal defense in the US, I see these patterns of discrimination in my work every day, where US police officers and security personnel routinely train with and share tactics and profiling systems with Israel. The deportation of a majority Muslim and people of color group is an example of how Israel engages in Islamophobia and racism, and silences debate by preventing the world from hearing the testimony of those who bear witness to the plight of Palestinians.”
– Bina Ahmad, New York City public defender