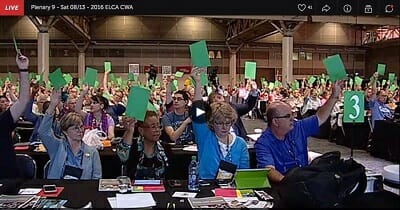 Huge news! Moments ago, the Evangelical Lutheran Church in America (ELCA) voted overwhelmingly — by an estimated 90% — to create an investment screen that would identify and remove the Church’s investments in corporations profiting from Israel’s violations of Palestinian rights, and other human rights abuses around the world. The new screen has a broad reach, ensuring that the Church would avoid investments in corporations currently complicit in human rights violations as part of the Israeli occupation, as well as any future corporations that become complicit.

ELCA marks the ninth denomination to engage in economic acts of conscience to support justice for Palestinians, following the Quakers, Mennonite Central Committee, United Methodists, Presbyterians, United Church of Christ, Unitarian Universalists, Catholic Conference of Major Superiors of Men, and the Alliance of Baptists — many of those in 2016 alone!

Congratulations to our friends and member groups at the ELCA, and particularly members of Isaiah 58, who led this extraordinary campaign. Help us share the exciting news on Facebook and Twitter!

ELCA voting member Darla Thiele, Dakota name Shining Star Woman, had this to say before the vote:
As a Native woman, the situation in Palestine reminds me of what my people have gone through here in America. I have seen my people lose our land, our lives, our culture — our songs, dances, spiritual ways. Like the Palestinians, we have no justice. Treaties have been broken… We talk about loving our neighbor. We talk about justice. But where is the justice?… Now is the time for the church to stop profiting from these injustices. Now is the time to bring healing, to bring peace, to bring justice.

The US Campaign was proud to work alongside Isaiah 58 and allies from member groups Israel Palestine Mission Network of the Presbyterian Church (USA), American Friends Service Committee, Friends of Sabeel – North America, New Orleans Palestinian Solidarity Committee, and Jewish Voice for Peace on the ground in support of this crucial effort.

As you know, we can only support this faith-based advocacy with support from people like you. Please be a part of these extraordinary breakthroughs with a donation to the US Campaign today.

P.S. Don’t miss the US Campaign’s 15th National Conference Oct 14-17, where faith leaders and other organizers from around country will gather to network and share what we’ve learned and where we’re heading. We hope to see you there!