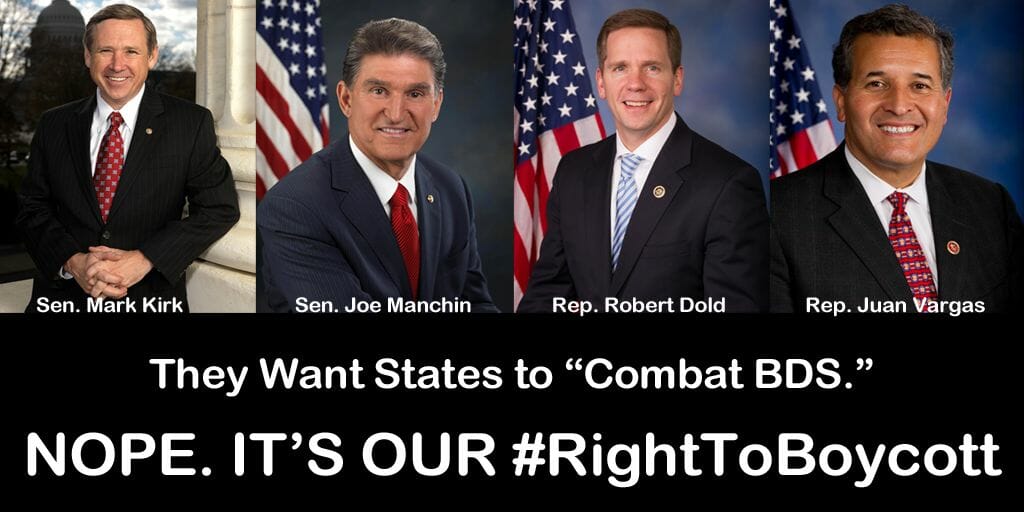 From the Boston Tea Party to the struggle for transgender rights today, engaging in boycotts to affect change is as American as apple pie.

But when it comes to boycotting Israel and corporations that profit from its oppression of Palestinians, some in Congress want to “authorize” states to punish you for exercising your First Amendment right.

Earlier this year, we let you know about the “Combating BDS Act of 2016.” Even though people like you sent more than 12,000 messages to your Members of Congress opposing this bill, it is now gaining momentum.

As of yesterday, 29 Senators and 90 Representatives had supported this outlandish legislation. Click here to see if your Members of Congress have cosponsored this bill.

This bill would “authorize” state and local governments to unconstitutionally penalize entities such as nonprofit organizations and corporations for supporting the Palestinian civil society call for boycott, divestment and sanctions (BDS).

Call and write your Members of Congress today and tell them you support BDS and oppose this legislation.

The Supreme Court has long held that boycotts and related activities to bring about political, social, and economic change are political speech, occupying “the highest rung of the hierarchy of First Amendment values.”

As the Harvard Law Review recently concluded, “Supreme Court precedents make clear that attempts to disqualify contractors for support of BDS are foreclosed by the First Amendment.”

Even though this bill might be unconstitutional, we still need to organize to oppose it. This legislation is designed to further encourage a country-wide effort by the Israel lobby to try to suppress BDS activism at the state and local level.

Check out the RightToBoycott website we recently launched with member groups Palestine Legal and Jewish Voice for Peace. Find out if anti-BDS legislation has been introduced in your state and get the legal and organizing resources you need to mobilize to challenge it. Thanks for taking action to tell your Members of Congress to oppose the “Combating BDS Act.”