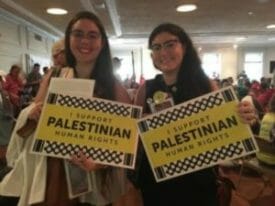 29 JulDid You See Our Palestine Signs at the DNC? Rabbi Shmuley Did

Yep, we worked with delegates to the Democratic National Convention (DNC) to distribute thousands of our “Progressive for Palestine” and “I Support Palestinian Human Rights” t-shirts, signs, stickers and buttons to more than 30 state delegations!

This presence was, Al Jazeera reported, a “show of force” in support of Palestinian human rights “unprecedented at other political conventions.” In fact, DNCdelegates were so receptive that we actually had trouble keeping up with the demand for materials!

After seeing these signs and stickers on TV and social media, many people have been asking us: how can we get this #ProgressiveforPalestine swag?

It’s easy. Just click here to make a donation to the US Campaign to End the Israeli Occupation and we’ll be glad to send some to you too. Creating this visible presence at the DNC in support of Palestinian rights, which built on our similar work in Cleveland at the RNC, was just one of the things we did this week in Philadelphia.

On Monday, we organized a path-breaking panel for delegates, cosponsored by member group American Friends Service Committee, entitled “Progressive for Palestine: Is the US Ready to Rethink Policy on Israel?” The standing-room-only crowd heard a special video message from Rep. Keith Ellison (D-MN), who assured us that thanks to the tireless work of Palestine solidarity activists, the conversation on Capitol Hill is changing for the better.

And Rep. Hank Johnson (D-GA) spoke passionately to the crowd about his work in Congress to hold Israel accountable for violations of US weapons laws and to advocate for the human rights of Palestinian children.

We were also privileged to hear from Dr. Jim Zogby, a member of the DNC’s platform committee who pushed hard for Palestinian human rights amendments, and Linda Sarsour, the most prominent Palestinian-American surrogate for a presidential candidate.

For example, check out our Executive Director Yousef Munayyer at this JVP-sponsored panel on Boycotting for Justice: Building Progressive Grassroots Power.

Huffington Post noted that if all of the Palestine solidarity activism on full display at the DNC “proceeds on its current trajectory, it could threaten the virtually unconditional support for Israeli government policies that has been a core tenet of both major parties for decades.”

That’s exactly right. In fact during the DNC, new polling confirmed recent trends and showed support for holding Israel accountable for settlements is supported by Hillary Clinton and Bernie Sanders backers alike with even some support among Republicans!

Help us continue along this trajectory by making your donation today to support our ongoing work and get your #ProgressiveforPalestine swag.

Of course, creating this visible presence for Palestinian rights at the DNC cost money. Help us raise $10,000 today to recoup those costs and help launch the next phase of our work to continue to make Palestinian rights a central part of this electoral season.