The US Campaign for Palestinian Rights initiated an open letter urging NFL players reported to have been going on a trip to Israel as part of an effort to get them to “become ambassadors of goodwill for Israel” to reconsider. The letter was signed by Palestinian groups, renowned figures including Angela Davis, Alice Walker, Harry Belafonte, and Danny Glover, as well as athlete-activists such as John Carlos, Craig Hodges, and Mahmoud Abdul-Rauf. 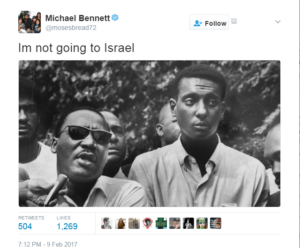 The day after the letter was published, NFL Pro Bowler and Super Bowl winner Michael Bennett of the Seattle Seahawks posted on his Twitter and Instagram accounts that he will no longer be going.

Sign the petition below to thank him for choosing to be on the right side of history!