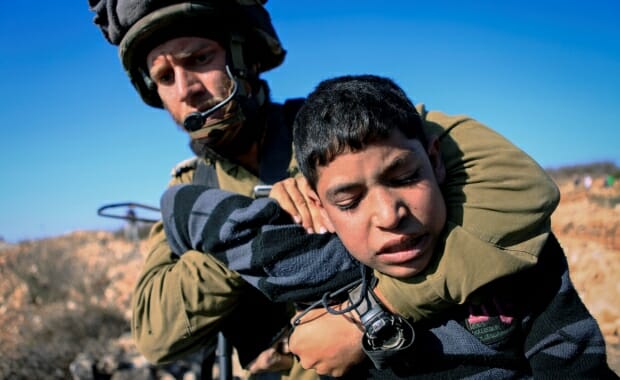 05 JanIn 2018, I resolve to dismantle the system denying Ahed Tamimi her childhood

In 2018, I resolve to do my part in tearing down Israeli apartheid. It’s not an easy New Year’s resolution, and Palestinians probably won’t win their freedom this year. But there is work you can join me in right now that will bring us closer to the inevitability of freedom. Help by supporting legislation for justice and accountability: H.R. 4391, the Promoting Human Rights by Ending Israeli Military Detention of Children Act. 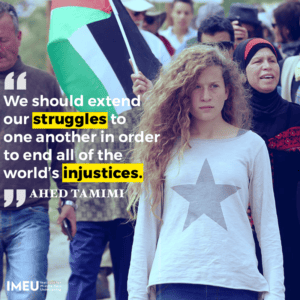 Ahed Tamimi, the brave Palestinian teenage activist who has experienced untold violence at the hands of the Israeli occupation in her short lifetime, spent her News Year’s Eve in an Israeli prison cell. Ahed will be punished severely for the most basic act of resisting a military occupation that has stolen her land, her freedom to live a peaceful childhood, and even the lives of her uncle and cousin. She faces 12 charges in a separate-and-unequal military court system with a 99.74% conviction rate. Read more about the connections between Ahed’s case and the landmark legislation I’m asking you to support.

Israel wants to make an example of Ahed and crush the will to resist. The Israeli government and its supporters are unapologetically brutal in the process; a minister called for life imprisonment and a prominent Israeli journalist implied that 16-year old Ahed should be raped. It is high time that we build our political power to end US complicity in Israel’s abuse of Palestinian children. 2018 will be the year – I can feel it. Take part in this change by spread the word about our momentum on Twitter and Facebook.

As allies based in the United States, we can make the biggest difference by working to dismantle US support for the system that’s trying to rob Ahed, and so many other Palestinian children, of their childhoods. In order to continue chipping away at the occupation infrastructure that incarcerated hundreds of Palestinian children last year, we need to work to end the US support that enables it to grind on.

That’s why 2018 is the year we will build up the power for good in Congress. Already, 20 Members of Congress have supported this historic legislation to stop US aid from financing Israel’s detention of Palestinian children. Together, we can get dozens more Members of Congress to support this legislation for accountability through transparency. Everyone has a role: let your network know to join in by spreading the word on Twitter and Facebook.

The Israeli military occupation, and its crushing systems like child detention, depend on the US government’s support and the US people’s indifference. In 2018, let’s roll up our sleeves and recommit to making change.