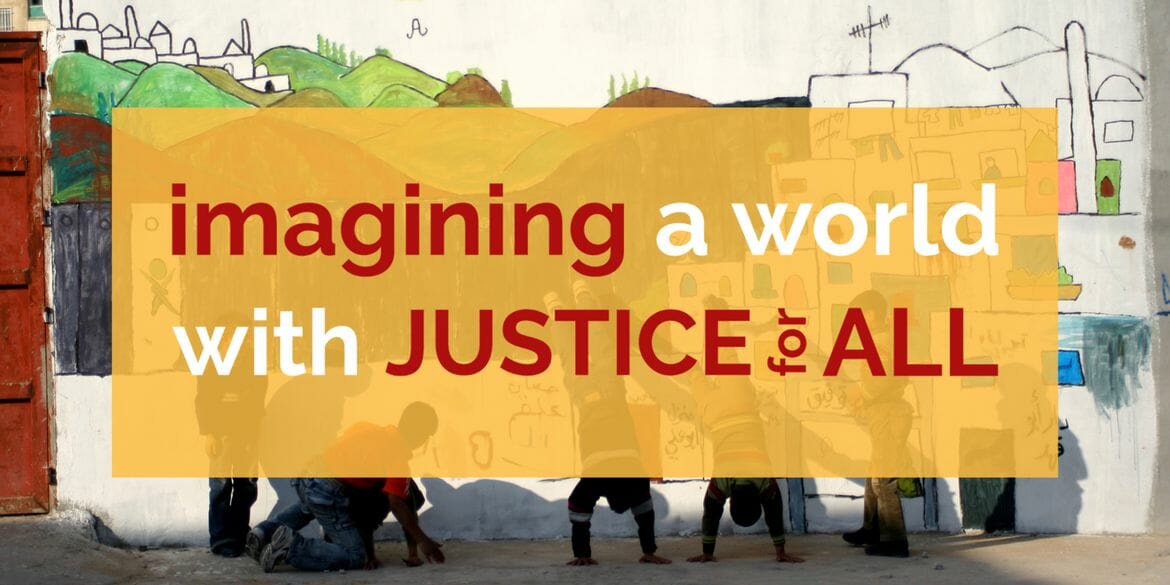 As this new election cycle ramps up and rumors of the Trump “peace plan” abound, we’re keeping our eye on the prize—and on progressive candidates to see where they land on Palestinian rights. At USCPR, we’re strategizing with our Palestinian and solidarity movement partners, and continuing our work on the frontlines of Palestine and progressive policy here in the US.

Halfway through the year, we want to share some highlights of that work with you! Here’s an inside look into how our policy and grassroots organizing team are moving even more members of Congress towards standing up for Palestinian rights.

Imagining a World With Justice For All 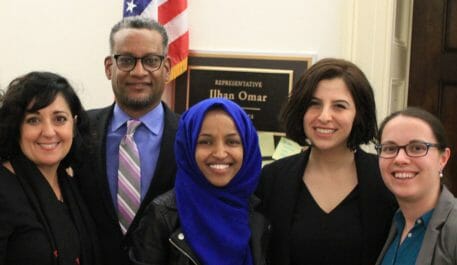 The struggle for freedom, justice, and equality for the Palestinian people is tied to the freedom struggles of people everywhere. From the US to Palestine, we must challenge injustice to build new futures and a world free of racism and discrimination.

US policy has long contributed to injustice, oppression, and human rights violations, both across the globe and here at home. Recognizing the role that people in the US must play to change this, we’re partnering with the Adalah Justice Project to advance the adoption of a truly progressive vision that imagines new possibilities and articulates our shared futures.

Part of what we are pushing for is a coherent US foreign and domestic policy that upholds the universal values of equal rights, historical justice, and freedom for all—from the US to Palestine. This looks, in part, like achieving reparations, the right of return for Palestinian refugees, and an end to the $3.8 billion that the US gives Israel in military funding each year. Join us in imagining possibilities!

Ending US Funding for the Israeli Abuse of Palestinian Children

On May 1, Rep. Betty McCollum (D-MN) reintroduced legislation aimed at protecting Palestinian children victimized by Israel’s separate-and-unequal apartheid military detention system. Every year, Israel detains and prosecutes 500-700 Palestinian children in military courts that lack due process guarantees and have a conviction rate of 99.74 percent. From the moment of their arrest by Israeli soldiers, these Palestinian children are subject to physical, emotional, and verbal abuse, beatings, and interrogations without a lawyer present. 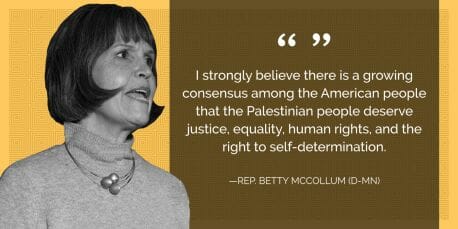 HR 2407, the Promoting Human Rights for Palestinian Children Living Under Israeli Military Occupation Act, amends an existing human rights law known as the “Leahy Law” to prohibit US funds from being used for the “military detention, interrogation, abuse, or ill-treatment” of children. The bill aims to end US funding for Israeli abuses and lays the groundwork for achieving justice by authorizing the appropriation of funds to monitor human rights abuses and to provide physical, psychological, and emotional rehabilitation to Palestinian children who have been victims of Israel’s military detention system.

USCPR’s policy team is building support for HR 2407 on Capitol Hill. In the last Congress, 30 cosponsors joined Rep. McCollum in standing up for Palestinian children. Through your calls and emails to your representatives, even more progressive members of Congress will speak out for ending unconditional US military funding to Israel!

Defending the Right to Boycott for Justice 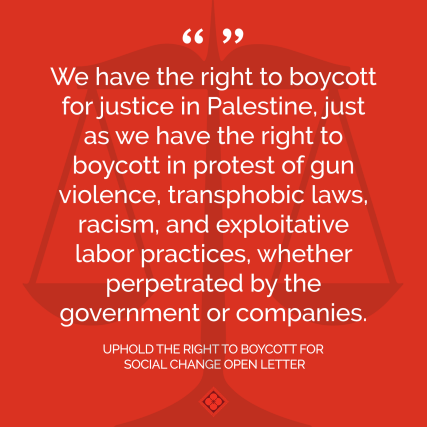 As Israeli violence against the Palestinians escalates, Congress is trying to shut down tactics used by social justice movements for decades—simply because these tactics are being applied in support for Palestinian rights.

250+ movement leaders, scholars, and organizations signed a letter calling on Congress to uphold our right to boycott for justice in Palestine. Thousands of you picked up the phone to call Democratic leadership and send emails to your representatives, successfully stalling the Israel Anti-Boycott Act in the last Congress and now S.1 with opposition in the House of Representatives.

Building a World Without Walls, from the US to Palestine 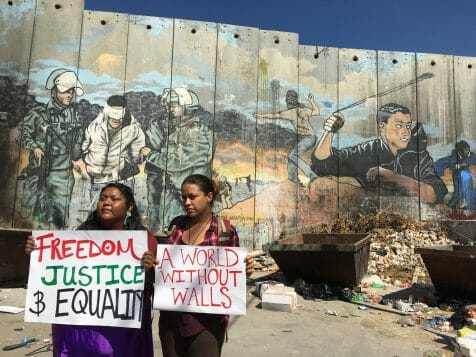 In November 2017, the first World Without Walls delegation made it to Palestine. 11 US, Latinx, and Indigenous organizers and activists from both sides of the US/Mexico border wall—including members of the Tohono O’odham tribe, whose ancestral lands are divided by the US/Mexico border and wall—met with Palestinians, trading stories and strategies of resistance to the ongoing dehumanization, exploitation, and ethnic cleansing of native people in both places.

When they returned, the group of journalists, unionists, students, videographers, and clergy from both sides of the US/Mexico border wall pledged their ongoing commitment to Palestinian liberation and shared their experiences with their communities. They’ve given presentations and sermons, and launched new BDS campaigns (like the first ever Mexican BDS campaign against CEMEX, a builder of the Israeli Separation Wall).

Two years of organizing later, we’re sending the second World Without Walls delegation to Palestine this November. The 2019 delegation will build on the work of their predecessors. 12 North American Indigenous, Latinx, and other leaders of color in the struggle against the US/Mexico border wall will spend six days meeting with local Palestinian activists building together towards a world without walls. 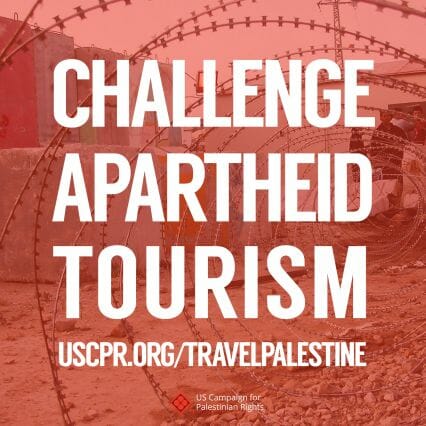 A crucial component of challenging Israel’s oppression of the Palestinian people is examining the harmful role of tourism in Israel. Israel cultivates a tourism industry that erases Palestinians from the landscape and history, appropriates Palestinian culture and cuisine, and whitewashes the reality of Israel’s state violence.

From Palestine to Mexico, from the Israeli-occupied Syrian Golan Heights to New Orleans, resisting racism means listening to the voices of those impacted by these systems of harm rather than normalizing and contributing to those systems through tourism. 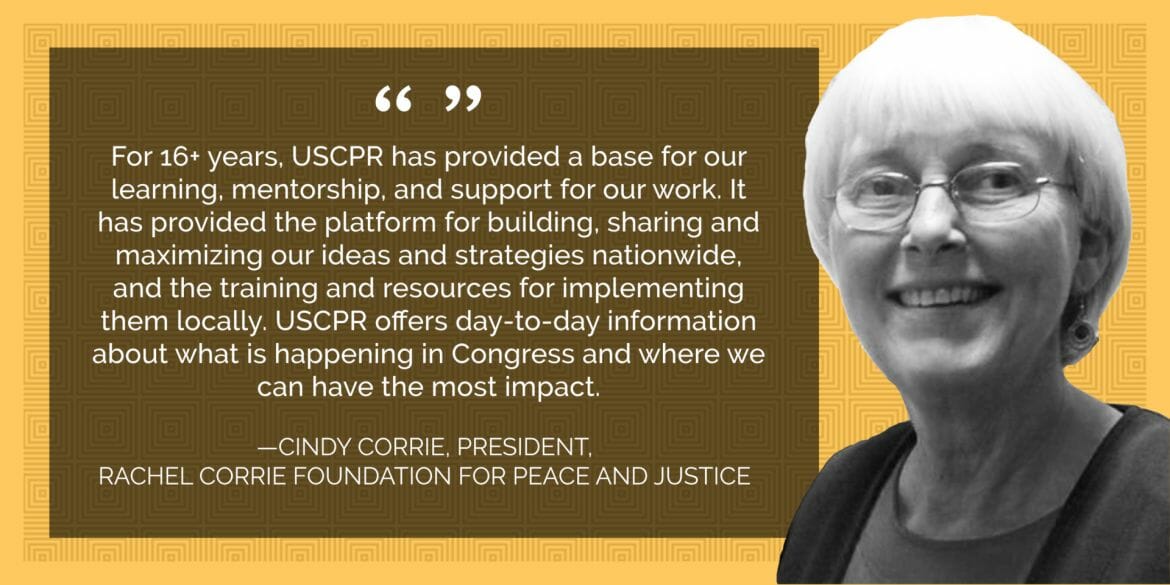