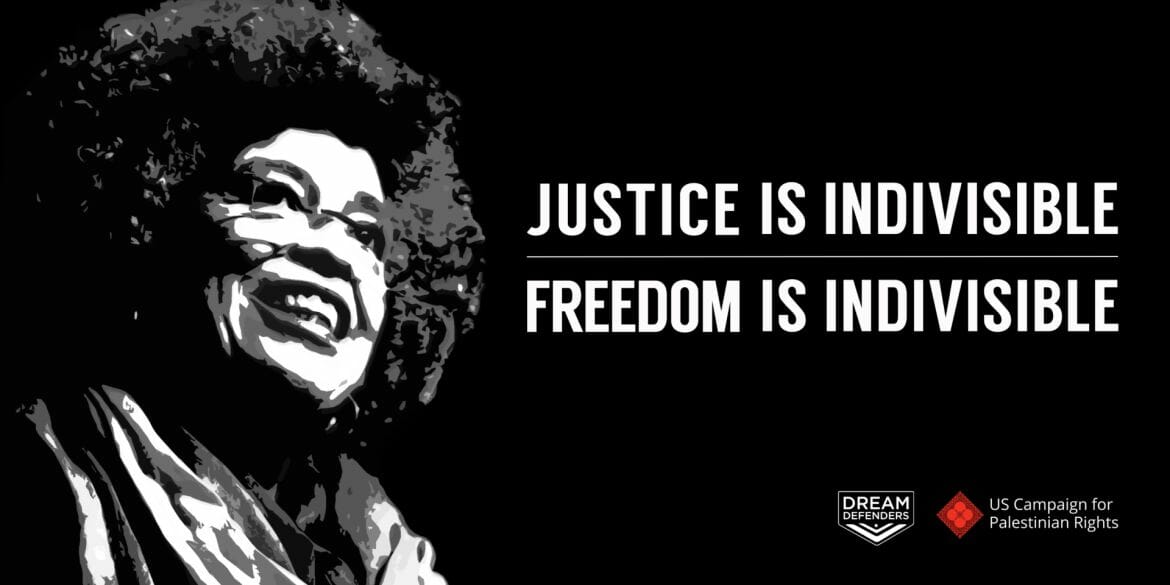 This February, join USCPR and the Dream Defenders by showing solidarity with all the radical voices that continue to be silenced for speaking up against injustice, from the US to Palestine.

On January 4, 2019, bowing to pressure from Zionist members of the Birmingham community, the Birmingham Civil Rights Institute (BCRI) voted to rescind its decision to bestow its highest honor, the Fred Shuttlesworth Human Rights Award, on renowned Black scholar and activist Angela Davis. Dr. Davis is the latest in a long line of Black internationalist voices to be attacked for their support of Palestine.

Leaders like Dr. Davis are targeted because they articulate the connections between global systems of oppression bearing down on Indigenous, Black, brown, queer, and other marginalized communities. They recognize that white supremacy, settler colonialism, imperialism, capitalism, and heteropatriarchy all reinforce each other and cannot be fought in isolation. Work for justice for one community must be part of a vision of justice for all.

Since the BCRI’s decision to revoke the Shuttlesworth Award was announced, there has been an outpouring of support for Dr. Davis from progressives and activists across movements. The BCRI has reconsidered its decision, and a diverse, intergenerational cross-section of grassroots and community leaders in Birmingham announced an alternative public event to honor Dr. Davis on February 16, the day she was supposed to receive the BCRI award.

Join us in honoring Dr. Angela Davis and the uncompromising ideals with which she has fought injustice.

Here are some actions you can take this February to show your solidarity with Angela Davis, Black internationalists, and the Palestinian people: