The parallels between the United States and Israel run deep. Both countries were founded as European settler colonial outposts, created through the ethnic cleansing of native peoples in order to gain control of maximum land and resources for a white ruling class. European settlers arrived in both Turtle Island (the pre-Columbian name for North America) and Palestine not to live in harmony with the native population, but to replace them. Through systematic dispossession, forced relocation, and massacres, native populations were killed and exiled, their holy sites desecrated, and their communities terrorized by military occupations.

The colonization of Turtle Island and Palestine are not things of the past. They continue today through policies including surveillance, containment, military checkpoints, police brutality, mass incarceration, displacement, theft of water and other natural resources, environmental destruction, desecration of burial sites, and cultural erasure and appropriation.

US and Israeli state and corporate actors collaborate closely to achieve their mutual colonial goals. US and Israeli police exchange tactics and weapons to repress native peoples and other communities of color. The same corporations that profit from Israel’s occupation and apartheid wall are vying for contracts to expand the US/Mexico border wall. The parallels continue; both walls bisect lands and families, and both Palestinians and native communities in Arizona are surveilled with technology from Israeli military corporation Elbit Systems. Israeli occupation profiteer and global oppressor G4S Systems was contracted to provide security services for the construction of the Dakota Access Pipeline (DAPL) threatening the lands, water, burial grounds, and sovereignty of the Standing Rock Sioux and other First Nations.

Many Palestinians and First Nations are standing together against the common colonial agenda of their occupiers. When the Standing Rock Sioux tribe water protectors rose in powerful resistance to DAPL, US police used tear gas, rubber bullets, pepper spray, sound grenades, and water cannons against the Standing Rock water protectors. Those weapons are all too familiar to Palestinians protecting their lands, water, sovereignty, and burial grounds from Israeli colonization. Palestinians in the US and the Boycott, Divestment, Sanctions (BDS) National Committee in Palestine issued powerful statements of solidarity with the Standing Rock resistance, and the Palestinian Youth Movement (PYM) organized a cross-country solidarity caravan to Standing Rock, publishing an inspiring statement:

…As Palestinians in the United States, we are exiled from our homeland while living as settlers upon Turtle Island. It is imperative that we demand recognition of the rights of Native nations and their people while building movements together with one another so that we can strengthen our collective call for justice. We call for an end of the Dakota Access Pipeline. We demand that the United States honor the treaties as the supreme law of the land and payment of governmental reparations.

Water is life for all of us.
Free the land.
Free the people.
Long live International Solidarity.

Activists in solidarity with Palestine and Standing Rock in Portland, Oregon and other cities have organized successful municipal divestment campaigns against corporations complicit in Israeli occupation and DAPL. The national #NoDAPL divestment campaign is drawing from lessons learned from BDS organizing. Increasing numbers of First Nations tribe members are traveling to Palestine to build cross-struggle solidarity and joint resistance. The recent #WorldWithoutWalls delegation included members of the Tohono O’odham tribe who will be cut off from their lands by the expanded US/Mexico border wall, just as Palestinians are divided from their lands by Israel’s apartheid wall.

“…the greatest challenges for Tohono O’odham (desert people) have stemmed from militarization and borders that have come with it, dividing our people and drastically changing our way of life…We are on the other side of the world, yet the occupation [in Palestine] is so familiar to us O’odham.”

Watch “From Palestine to the Pipeline” webinar with Indigenous and Palestinian organizers about their time at Standing Rock and their shared struggles against settler colonialism, genocide, displacement, and the environmental destruction to homelands. 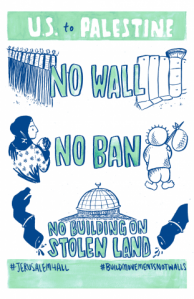