Palestine is a Feminist Issue

Intersectional feminism is a framework that holds that women’s overlapping, or intersecting, identities impact the way they experience oppression and discrimination. Intersectionality rejects the idea that a woman’s experience can be reduced to only her gender, and insists that we look at the multiple factors shaping her life: race, class, ethnicity, disability, citizenship status, sexual orientation, and others, as well as how systems of oppression are connected. This framework has been developed and pushed by Black women whose particular oppression is often erased due to the lack of intersectional analysis.

When we look at the world through an intersectional feminist lens, it becomes clear that Palestine is a feminist issue. Palestinian women face oppression and violence at the hands of Zionism, and are disproportionately impacted by the structural violence of Israeli apartheid. Understanding this disproportionate impact lies at the core of understanding Palestine as a feminist issue, writes David Lloyd:

“Israel’s war against the continuance of Palestinian life targets women in every sphere. Certainly it targets women as potential or actual agents of the reproduction of life itself, as mothers and as caretakers, but it also targets women as reproducers of social and cultural life, as if the targeting of women—as so often in colonial regimes—were understood to be the royal road to the destruction of indigenous social and political life. Living under Israeli occupation or within the borders of its racial state has been devastating for all Palestinians, but is especially destructive for Palestinian women.”

State violence is both racialized and gendered, an understanding that the feminist network INCITE! Women and Trans People of Color Against Violence has worked under for decades, and why Palestinian women scholar activists like Nada Elia push to end the idea that Zionism is a feminist issue. Palestinian women face deliberate, systematic violence from the Israeli apartheid regime. They are denied their freedom, access to education, economic opportunities, freedom of movement, and their reproductive health. They are subjected to gender-based violence at the hands of Israeli soldiers and while they are held as political prisoners in Israeli prisons. They are disproportionately impacted by the displacement and poverty that are a direct result of Israel’s ongoing occupation.

No, You Can’t Be A Feminist And A Zionist

The fact that there is even a debate about the compatibility of Zionism and feminism highlights the importance of intersectional feminism. In the words of Jaime Omar Yassin, “If gender is shared by all racial groups, feminism cannot be Zionist, just as it cannot be neo-Nazi—feminism that doesn’t have an understanding of how it intersects with racial and ethnic oppression is simply a diversification of white supremacy…Is it possible to openly call for the death of women in a neighboring state, to support a political and economic regime that without a doubt contributes to their subjugation both at the hands of Israel, and in Palestinian society, and still be a feminist?”

To be a feminist, you must stand with Palestinian women as they fight for freedom, justice, and equality. As long as Palestinian women are forced to give birth at checkpoints or shackled to a prison bed; miscarry at massive rates during Israeli airstrikes; are having their homes destroyed; have their reproductive health and children viewed as demographic threats; are prevented from studying abroad by the Israeli blockade; are stoned by Israeli settlers and harrassed by Israeli soldiers as they walk to school; then Palestine is a feminist issue.

So-called feminism that claims to define what a liberated woman looks like while leaving out the majority of the world’s women who are of color, many of them facing the violence of war and colonialism, is racist, not liberatory. In the words of bell hooks: “As long as women are using class or race or power to dominate other women, feminist sisterhood cannot be fully realized.”

Check out these articles, films, and additional resources on the topic:

In spite of the violence that they are subjected to, and systematic efforts to silence them and limit their political engagement, Palestinian women are – and have always been – significant players in the Palestinian resistance movements. 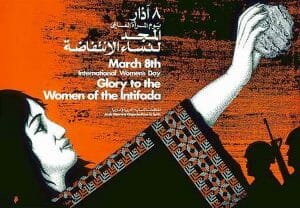