Each year the Israeli army arrests thousands of Palestinians in an attempt to suppress any opposition to its continued occupation and apartheid policies. They are arrested under Israeli military orders that prohibit basic civil, cultural, and political rights such as the attendance of demonstrations, membership of political organizations, and the writing of slogans on the Apartheid Wall.

G4S operates in 120 countries, making it the largest private security company worldwide. In the US, G4S operates privatized juvenile detention facilities and works alongside Homeland Security’s Customs and Border Protection to detain and deport people across the U.S./Mexico border. 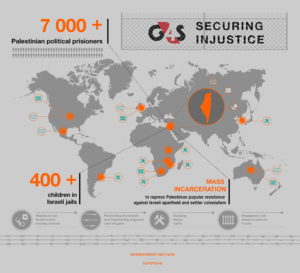 G4Sfacts.org documents the various injustices perpetrated by G4S, ranging from its complicity in Israel’s oppression of Palestinian prisoners to its transportation of undocumented immigrants in the United States, a service it brands as “The Bus No One Wants to Catch – The End of the Road for Illegal Immigrants.” It is co-hosted by groups working on a range of issues related to G4S such as prison divestment and immigrant rights including Dream Defenders, Enlace, Hands Up United, and Palestinian Youth Movement. 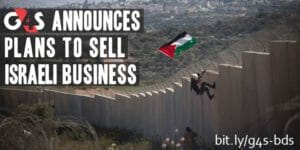