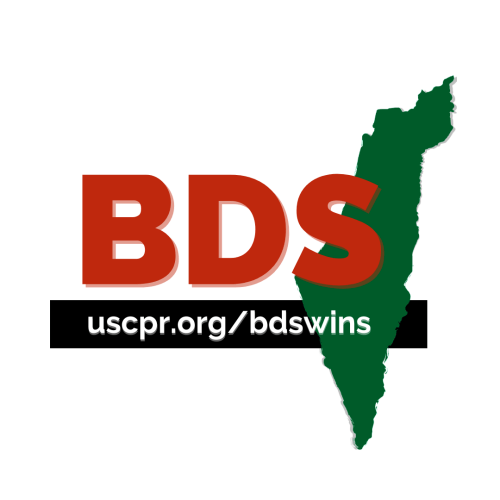 This is a list of 250+ boycott, divestment, and sanctions (BDS) wins in the United States. Last updated June 2022.

July 21, 2021 – Ben & Jerry’s announces their decision to stop selling ice cream in illegal Israeli Jewish-only settlements on stolen Palestinian land. Read the joint statement from our organizations, “Where We Stand on Ben & Jerry’s.”

October 24, 2013 – Association for Humanist Sociology Votes to Support the Academic and Cultural Boycott of Israel – International

May 23, 2018 – Associated Students of the University of Oregon pass BDS resolution by 2/3 margin – Eugene, Oregon

March 22, 2018 – Federation of Teachers at Los Rios, the largest community college in California, votes to divest from Caterpillar and G4S – Sacramento, California

June 12, 2022 – BADBADNOTGOOD cancelled their concert in Israel in solidarity with the Palestinian people – International

June 9, 2022 – Big Thief cancelled their shows in Israel in solidarity with the Palestinian people – International

December, 2015 – American journalist Doug Henwood refuses to have his book on Hillary Clinton translated into Hebrew

May 4, 2015 – Lauryn Hill cancels performance in Israel in response to calls for boycott

October, 2014 – Musician and Poet Boots Riley of The Coup endorses the call for the cultural and academic boycott of Israel

July 12, 2017 – Disciples of Christ call on Israel to guarantee basic due process rights and prohibit torture and ill-treatment of detained children – National

July 6, 2017- Mennonite Church (USA) votes by 98% to create an investment screen for the purpose of withdrawing investments from companies that are profiting from the occupation– National

July 3, 2017 – United Church of Christ calls for military sanctions on Israel for its mistreatment of Palestinian children in Israeli detention – National

June 12, 2017 – By a vote of 144-5, Minnesota Conference of the United Church of Christ divests from companies that profit from the Israeli occupation of Palestine – Minnesota

Summer, 2005 – United Church of Christ General Synod calls for the use of Economic Leverage — including ending military aid and divestment — to promote peace in Middle East

Between March and August, 2013 – TIAA-CREF divests from SodaStream

September 12, 2009 – TIAA-CREF divests from Africa-Israel company due to violations of “human rights and international law”

July 23, 2021 – Algerian judoka refuses to participate in an Olympic match with Israel – International

Do you see something missing? Click here to let us know so we can add it! (U.S. only please)