No to All Bans

Since Donald Trump became president, outraged liberals and progressives nationwide have protested his repeated attempts at a Muslim Ban targeting refugees, immigrants, Arabs, Iranians, Africans, and others based on their religion and national origin. The ban has torn families apart, put asylum seekers at risk, and further endangered countless refugees fleeing wars and famine. As Trump continues to expand the War on Terror in places like Yemen, Syria, Iraq, and Afghanistan, there will only be more civilians killed and forced to leave their homes. There has been a lot of powerful calling out of the racism, xenophobia, and anti-Muslim bigotry behind this ban, which is all the more grotesque considering the role of U.S. interventions and militarism in creating the conditions from which people are being forced to flee.

Israel itself has been banning refugees since 1948. Israel was created and is maintained through the ethnic cleansing and ongoing exile of more than 7 million Palestinian refugees who are denied the right to return to their homes and lands — an inalienable right inscribed in international law — simply because of their religion and national origin. 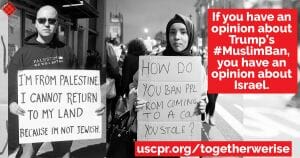 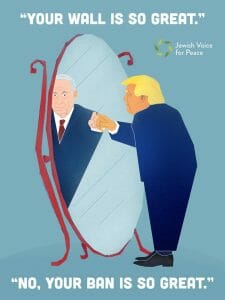