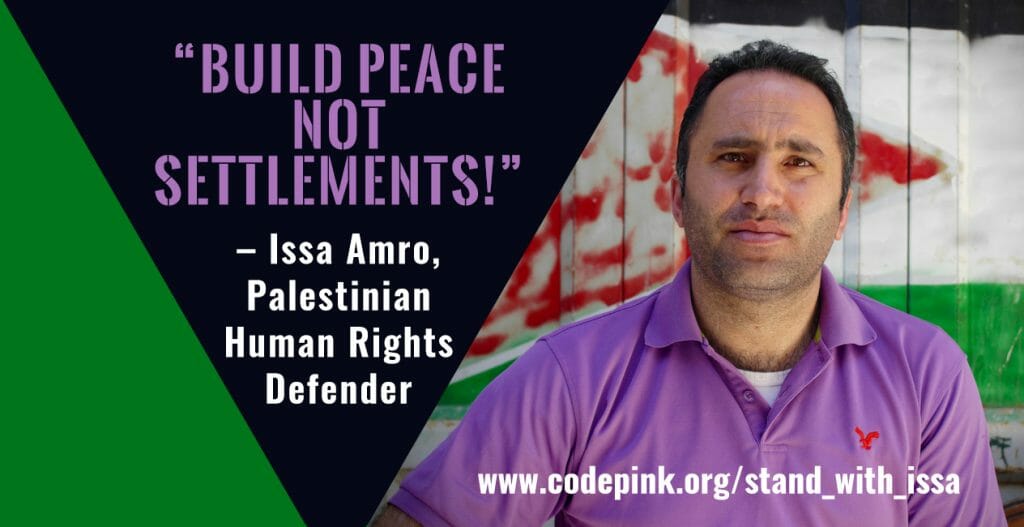 07 Jun#StandWithIssa While #Marking50 Years of Occupation

Today marks the 3rd day of our week #Marking50 years of Israel’s military occupation of the West Bank and the Gaza Strip.

The heavy hand of Israeli military occupation is experienced on a daily basis by Palestinians in the West Bank city of Hebron where extremist Israeli settlers have colonized the heart of the city. They regularly terrorize the local population under the watchful eyes of Israeli soldiers.

It’s in this difficult environment that Issa Amro, a Palestinian human rights defender, founded the group Youth Against Settlements. Issa teaches young Palestinians about non-violent resistance and organizes them to protest the illegal Israeli settlements which have such a devastating impact on the lives of Hebron’s residents. His organization also runs a kindergarten and community center, and builds up the community’s infrastructure.

Issa needs our help to continue his important work. He is currently facing 18 politically-motivated charges in Israeli military court, which convicts more than 99% of Palestinians. If convicted, Issa faces years in Israeli prison.

Their letter further states: “We believe that nonviolent means of political engagement should be encouraged rather than suppressed, and that the persecution and imprisonment of peaceful activists such as Mr. Amro only threatens the safety and human rights of both Palestinians and Israelis.”

Read the full text and then take action by asking your Representative to sign on to this letter.

This campaign to #StandWithIssa is being led by USCPR member group CodePink.

Issa has been recognized internationally for his activism by the UN, Amnesty International, and the European Union, and has been a guest of the US State Department.

Both Amnesty International and the UN have released statements condemning the charges he is facing as being politically motivated in nature to prevent Issa from continuing his important contributions to Palestinian activism against illegal settlements.

After you’ve contacted your Representative today to #StandWithIssa, be sure to check out the actions taking place across the country #Marking50 years of Israeli occupation. Click here to find an action near you.

This week, we’ve been busy building support for this letter on Capitol Hill. But our work in DC is not nearly as important as these Representatives hearing from constituents like you.

Thank you for taking action to #StandWithIssa and encouraging your Representative to sign on to support Palestinian human rights defender Issa Amro.

PS: Hey everyone! That’s me after advocating for the Issa Amro Dear Colleague letter earlier this week. I am the new Government Affairs Fellow with the USCPR, and I am super excited to be working out of our DC office this summer!

I am a senior at Michigan State University (Go Green!), studying International Relations, Arabic, and Muslim Studies. I look forward to our correspondences over the next few months!