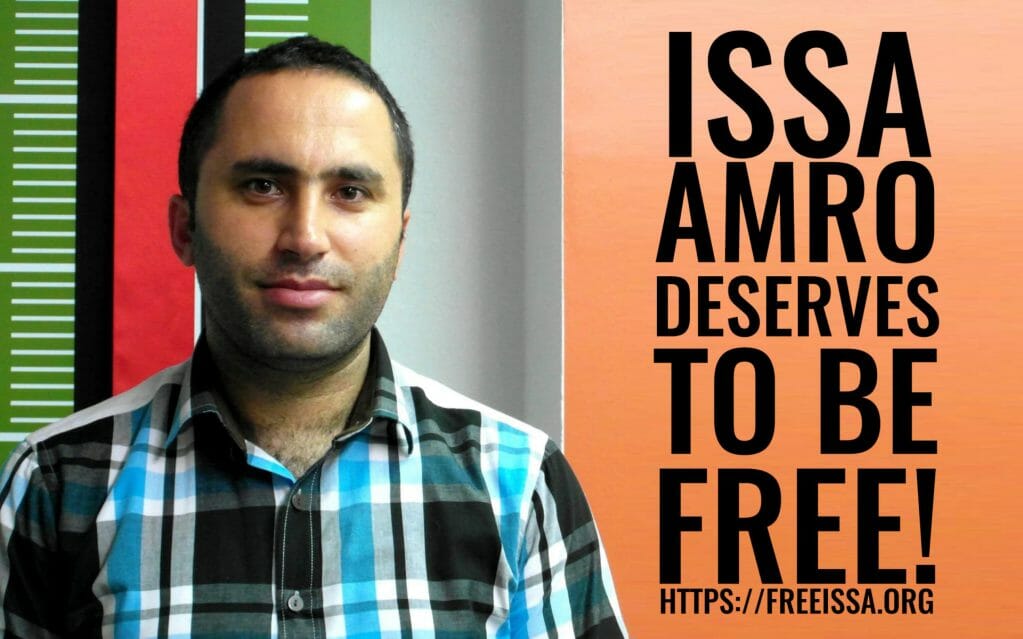 24 MarIssa Amro Should Be Free.

As Israel ramps up its repressive campaign against Palestinians, human rights defenders–those documenting, speaking, and organizing against Israel’s oppressive policies–are one of its first targets. And Issa Amro, community leader and co-founder of the Hebron-based Youth Against Settlements, is no stranger to being a target of Israeli efforts to silence his activism.

Palestinians face a conviction rate of 99.74% in Israeli military courts, which is why we, and our member groups at Codepink, Jewish Voice for Peace, Interfaith Peace Builders, and others, are petitioning United Nations Secretary General Antonio Guterres and United Nations High Commissioner for Human Rights Zeid Ra’ad Al Hussein to pressure Israel to drop the charges against Issa.

Under Israeli military occupation, Palestinians are forbidden from partaking in almost every form of political expression. The ridiculous charges against Issa range from “insulting a soldier” to “gathering without permission.” They reek of political persecution as clear as day.

The work of Issa and Youth Against Settlements has been internationally recognized, and more importantly, it is incredibly effective in fostering and building Palestinian community and resistance in Hebron, a place where Israeli apartheid, oppression, and occupation is often at its worst and most violent. Israel wants to lock up Issa because he is a powerful community leader and organizer against Israeli apartheid, and therefore a threat to the Israeli status quo.

Help keep Issa free and able to do his incredible work. After you have signed the petition, share it on Facebook & Twitter so we can get as many signatures as possible before the official start of his trial on March 26!

Thank you for taking action to help one more Palestinian voice for freedom, justice, and equality!

P.S.–Israel is once again targeting Omar Barghouti, another Palestinian human rights defender, and co-founder of the global boycott, divestment, and sanctions (BDS) movement. Click here to read a statement by the Palestinian BDS National Committee about the fabricated charges against him.