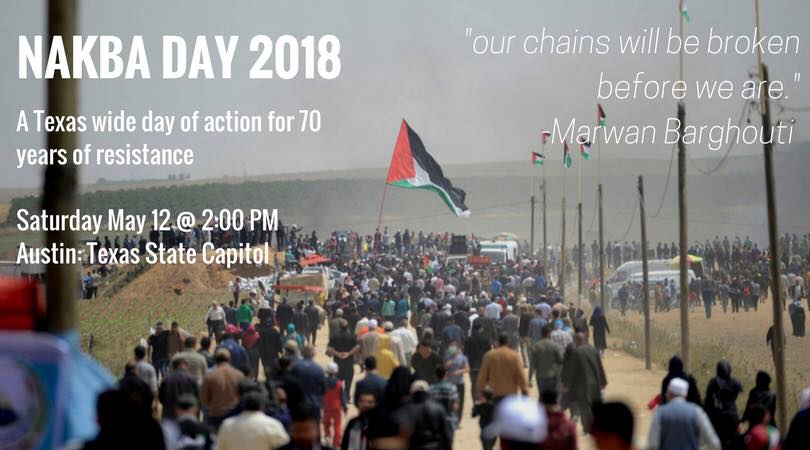 May 15th, 2018, marks 70 years of the ethnic cleansing of almost 800,000 Palestinians from their homes and lands, at the hands of zionist militias. To this day these refugees and their descendants are still barred from returning to Palestine. Israel has recently escalated its racist and genocidal policies, with the increased detention and murder of children, while Jerusalem, the capital of Palestine, is under threat. The Palestinian people, alongside their international allies, are organizing to let the world know that the land, from Haifa to Jerusalem to Gaza and all in between, will be liberated and that a sovereign, independent, free Palestine is inevitable as long as its people remain beacons of resistance and resilience.

We are gathering as a community to demand:

1. The right of return for ALL Palestinian refugees and their descendants
2. Israel keep its hands off Jerusalem, the capital of Palestine
3. The end of the 11 year blockade of Gaza
4. Freedom for all political prisoners
5. An end to Israeli colonization of ALL of historic Palestine

Despite over 70 years of Israeli colonialism, racism, occupation, and apartheid, the Palestinian people continue to resist and inspire the world to stand up against oppression in all its forms.

In the words of Marwan Barghouti, “Our chains will be broken before we are.”