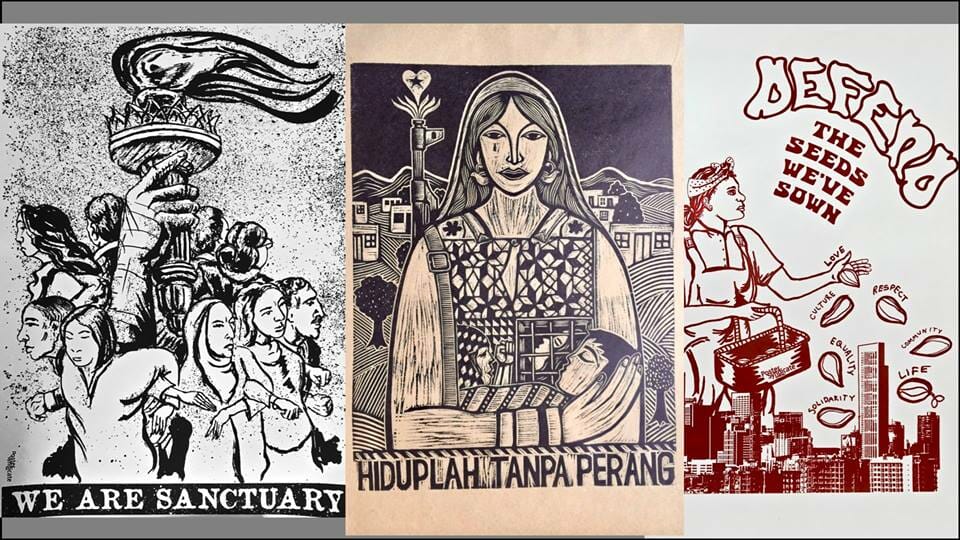 ARISE! Power of Political Art
-Linking local, national, and international struggles and 70 years of the occupation of Palestine.

Clarion Alley Mural Project, Art Forces, and AROC present ARISE! Power of Political Art, featuring political artworks from artists, collectives, and movements locally and globally over the past 50+ years, addressing the social/political crises of our times. The exhibit makes links between local, national and international struggles and 70 years of the occupation of Palestine.

In a city that is rapidly changing to cater to the one-percent at every level, Clarion Alley Mural Project (CAMP) is one of the last remaining truly punk venues in San Francisco. The exhibition is part of CAMP’s work to be a force for those who are marginalized and a place where culture and dignity speak louder than the rules of private property or a lifestyle that puts profit before compassion, respect, and social /economic / racial/environmental justice.

Art Forces uses community public art and technology art to inspire critical thinking and action–including murals, websites, social and new media. From the streets of San Francisco Bay Area to Olympia Washington, to refugee camps of Palestine and Lebanon, the projects make visible histories and relationships that have been obliterated and forgotten, making connections to national and global issues of social justice, borders, precarity, migrations and decolonization.

A selection of the Artists/Collectives/Movements featured in the exhibition include:
• Al Nakba – Commemorating 69 years of Resistance – Photo exhibit by NorCal Friends of Sabeel. On loan from the Palestine Action Network (PAN)
–Al Nakba: 1948 expulsion of over 750,000 Palestinian, in formation of state of Israel.
• Emory Douglas
• Posters from struggle to save I-Hotel, courtesy of Manilatown Heritage Foundation
• Representations of mural works from Clarion Alley Mural Project
• Representations of community mural works in Palestine and Lebanese refugee camps by Art Forces and others
• The San Francisco Poster Syndicate
• South of Market Community Action Network (SOMCAN)
• Together We Can Defeat Capitalism (TWCDC)
• CAPITALISM IS OVER! If You Want it
• Zapatistas
• Nicholas Ganz (Germany)
• Chip Thomas
• Shaghayegh Cyrous
• Keyvan Shovir
• Nancy Hom
• David Petrelli
• Ucup / Taring Padi (Indonesia)
• Political Posters from the American/Vietnamese War
• Subandi Giyanto (Indonesia)
• England Hidalgo
• Susan Greene
• Megan Wilson
———————————————————–
Part of 70 Years of Palestinian Resistance and Resilience
Bay Area week of Events to Commemorate the Nakba

From May 10th – May 16th, The Palestine Action Network (PAN) will be hosting a week of events to uplift and highlight Palestinian resistance and resilience to 70 years of colonial occupation. We also encourage groups and organizations to host Nakba events during this week. Those who who’d like their event to be publicized can contact PAN so that we can promote it for the week of Nakba70. We are also looking for endorsements! All who are interested in holding separate events OR wish to endorse these events, please email palestineactionnetwork@gmail.com