70 years after the Nakba. The greatest mass mobilization in years in the form of the Great Return March. Another spike in mass arrests and home demolitions. The city of Dublin divesting from the Israeli occupation. Lives stolen and cut short. An ongoing military occupation and blockade. Lives lost, lives gained, lives celebrated and memorialized.

2018 has already held so much Palestine, and there is only more to come. In the midst of the long struggle for freedom, justice, and equality, we called on visual artists to UNLEASH their imaginations and visualize futures.

UNLEASHED: visualizing futures was an art competition, open to all visual artists and creators, to imagine liberation and what might our worlds and communities feel like after the fight is won and we are freed. Palestinian artists had the option to submit under a second call to artistry, to meditate on Palestine beyond apartheid.

The quest is to be liberated, for all peoples existing under systems of subjugation and oppression. From Palestine to the US and across the world, our futures are woven into one fabric. To be allied is to resist against all systems of oppression, as one. So, what is liberation? What might our worlds and our communities feel like after the fight is won and we are freed? 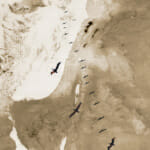 Maps most often provide vital information regarding borders, topography and location. However, artificial borders (lines drawn on a map) are usually employed to divide us with physical, political and psychological consequences that transcend generations. Without borders, we rely on the natural elements to determine our place just as migratory birds or insects do. Imagining a world without artificial borders is to imagine the end of the scourge of nationalism. In this border-less map of Palestine, the birds suggest freedom of movement, direction and perspective with the hope of liberating us all from another scourge – war. 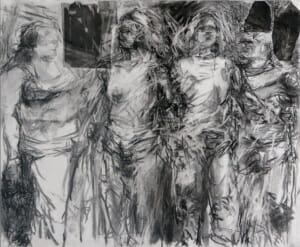 Caryatids in their earliest forms refer to sculptural forms of women used as supports in classical temples. In this capacity they were also associated with punitive enslavement imposed by governing power. My drawing is directly inspired by recent years of personal engagement with organizing and protest as a union member, activist, and citizen, and awareness of the deep organizing women world wide have undertaken historically and to this day in support of movements of liberation. The drawing pays homage to the work of deep organizing as the substrate of any process of change, and specifically, to the often invisible work of women. It envisions present-day caryatids stepping away from oppressive structures and power, into free, independent agency that maintains at the same time an ongoing commitment to collaboration and conversation. 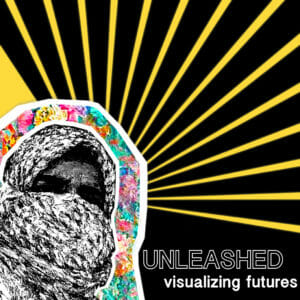 A bit of insight into the design of the theme:UNLEASHED came from a vision of unrestrained possibilities, but one with power and directionality behind it. To be free is to move upwards and outwards, no barriers. The sunburst rays symbolize movement and directionality to the unknown future, while also paying homage to the Black liberation movement. The yellow rays speak to a positive growth, while the black background suggests both positive and unexpected outcomes. The mirroring of the banner speaks to alternate realities and futures. Bringing in Palestinian identity and resistance, the face of the figure in the foreground is covered with a kuffiyeh, leaving their gender unidentifiable. The flowers in the background immediately challenge any notion of militarism associated with the wearing of the kuffiyeh in this style – a toxic and racist association that conflates Palestinians the struggle for freedom, justice, and equality with aggression and violence.