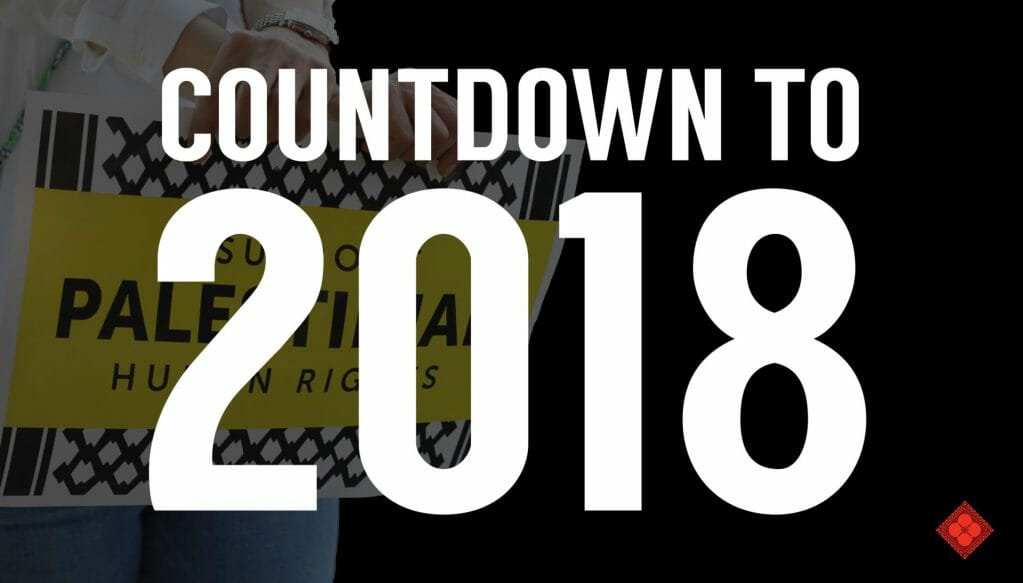 Your support made all the difference in 2017. The last 12 months have seen some of our most impressive accomplishments to date. These victories were only possible through the joint efforts of all our partners in the movement for Palestinian rights.

This year, we are proud to be part of wins for freedom, justice, and equality stretching from Capitol Hill to the NFL. Read on for the countdown of the ten most significant accomplishments of 2017!

10. In November, you helped us plant 2,471 olive trees through our partnership with the Palestinian Fair Trade Association’s Trees for Life program. We hope that these trees will outlast the occupation, contributing to the livelihoods of Palestinian farmers for generations to come.

9. In June, US Campaign member groups carried out 50+ actions around the country to mark 50 years of Israeli military occupation, 70 years since the Nakba, and 10 years since the beginning of the siege on the Gaza Strip, highlighting how the struggle for justice continues.

8. Throughout the year, we amplified Palestinian voices in the mainstream media. We brought Palestinian rights into the conversation with 116 appearances on outlets ranging from NBC to The Washington Post to Democracy Now! to Al Jazeera to TIME to Fox News, and others.

7. Also throughout 2017, we rolled out Together We Rise, our political education curriculum. Designed for everyone from budding activists to seasoned organizers, it includes webinars, toolkits, infographics, and more to strengthen liberation struggles from the US to Palestine.

6. In October, we helped send the World Without Walls delegation to Palestine. 11 Latinx, Indigenous, and US grassroots leaders from both sides of the US-Mexico border wall met, learned from, and shared with Palestinians resisting Israel’s apartheid wall. We will continue the critical work of building across movements well into 2018 and beyond.

5. In February, Seattle Seahawks football player Michael Bennett took a stand against apartheid by refusing to go on an Israeli-sponsored propaganda trip. The US Campaign and our partners worked with Bennett, and six other NFL players who also boycotted the trip, to shine a spotlight on Palestinian rights and bring the conversation into the mainstream.

Rounding out a year of cultural boycott wins, Lorde, the internationally acclaimed, Grammy Award winning musician, announced this week that she would be canceling her concert in Israel.

4. In June, 32 Members of Congress sent a letter to the State Department in support of Palestinian human rights activist Issa Amro, who is facing trumped up charges in Israeli military courts for his nonviolent resistance. The US Campaign also helped facilitate Amro’s visits to Capitol Hill this fall, building critical relationships with Members of Congress including Representatives Bernie Sanders, Betty McCollum, and Keith Ellison.

3. Over the summer, our team grew to welcome Lena Abdelhamid as Manager of Finance and Operations, Mike Daly as Development Director, Nusayba Hammad as Communications Director, and Leah Muskin-Pierret as Government Affairs Associate.

2. In November, the first ever bill supporting Palestinian human rights was introduced in Congress, thanks to the groundbreaking work of Defense for Children International-Palestine and the American Friends Service Committee. We have been educating and mobilizing constituents, connecting them to congressional offices to bring more Members of Congress on as sponsors of this landmark legislation.

1. Since we were the first to sound the alarm over the Israel Anti-Boycott Act in April, we have been leading the fight against this draconian legislation that would criminalize boycott and infringe on free speech. We mobilized over 11,000 constituent letters, member groups organized actions at town halls across the country, and in a big win, Sen. Kirsten Gillibrand (D-NY) withdrew her sponsorship of the bill. Today, the bill is effectively stalled in Congress.

As we move into 2018, we hope you will continue to stand beside us in the fight for freedom, justice, and equality.